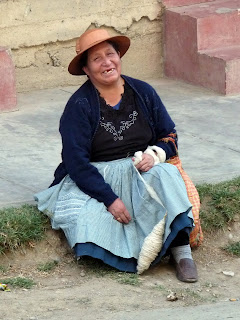 Further to the incident of ever-increasing wide-eyed schoolkids crowding around us to look at the strange gringos last week, yesterday three women actually stopped us and asked if they could take a photo of us. A photo of us!
Initially I thought they were asking if we could take a photo of them, but no, they wanted us to pose so they could capture the sight of us on film. I was too shocked to realise what was going on before they actually took the damned picture. Something to show the grandchildren I suppose. Proof they once encountered such incredible specimens. 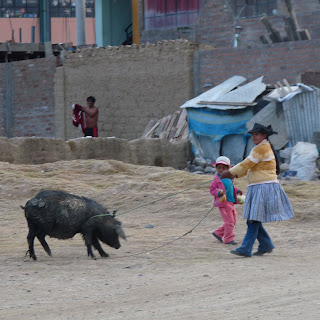 We really are a wandering freak show for the locals, and they aren't shy about letting us know it. I could hear the women laughing behind us as we wandered on.
You'd swear we had six eyes, four noses and arses for faces. (No comments please.) People usually stare as we walk past. Oftentimes with mouths open too. Sometimes they talk among themselves and laugh after we've passed, other times they actually comment directly. Even now, as I type, there's a kid standing in front of me, just staring, as if trying to eat me with his big brown eyes.
It's clear we're the subject of much wonder for the Huancayans. It brings a whole new meaning to the term ¨tourist attraction¨.
Labels: Huancayo Perú Vanity