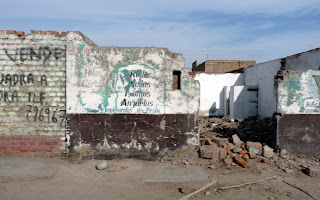 We've come to Pisco specifically to visit las Islas Ballestas, the "poor man's Galapagos". Being poor, we have to make do with inferior animals to those which rich tourists can enjoy on the proper islands in the middle of the Pacific.
Nevertheless tomorrow mornin' we'll see sea lions, Humboldt penguins, flamingos and loads of other less-interesting birds, while I'm also looking forward to visiting the islands which made a fortune out of shite. Bird shite to be precise. More on that some other time. 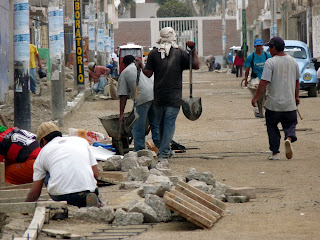 Also in shite is the city of Pisco itself. Levelled by a 7.7 magnitude earthquake two years ago; 800 killed; 40 to 50 unaccounted for. The streets are still lined with rubble, and everywhere you look there are signs of destruction. Houses tottering, buildings half standing,
Whole tracts of land beside the rebuilt road into the city were just mounds of rubble, waiting for the diggers to come and push it away so the houses can be rebuilt. They'll account for a few more once they go through that.
Those who used to live in those houses, those who survived, now live in wooden huts just across from the rubble, saving and scrimping so they can rebuild their homes again. I guess they didn't have insurance. Even if they did, I'm sure earthquakes aren't covered under the old "acts of God" excuse.
On the main square, the front of one three-storey building is missing completely, walls stripped away to leave it naked and undignified, three levels of rooms laid bare complete with furniture as if dissected in a larger-than-life biology lesson.
Everything is wrecked. Even the cathedral is in tatters, all boarded up with its spire in a sorry state. I wonder if that was covered under the "act of God" rule. 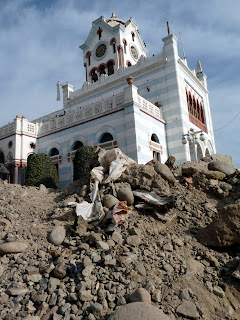 Some buildings are rebuilt, but none are fully back to pre-earthquake standards. Even in our hostal, which is the cleanest and nicest we've stayed in yet (no rats, fleas, maggots etc.), there's still work going on, builders cementing walls, securing ceilings, proofing stuff against future 'quakes.
Rebuilding and clearing up is still going on. They were fixing pavements today. All over the city cement mixers are turning, while old women look out sadly from half-built huts and remnants of houses.
At least they survived. Messages to the dead are unavoidable. A moto-taxi passed by while we stopped for coffee earlier. "En memoria de mis padres, Ida y Juan." Parents lost and remembered on a back window. Plenty of other "en memoria" messages could be seen on other back windows too.
It makes you think.

More pictures of Pisco can be seen here: http://picasaweb.google.com/faheyc/Pisco#