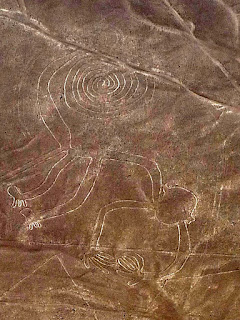 The other day, in Nazca, I popped into a tiny corner shop to buy some coffee. The old man behind the counter remembered me from the evening before when myself and Jenny dropped in to buy a pack of cards.
"¿Café?" he repeated. "No, no hay café aquí." He shook his head sadly. The shop had everything else but coffee. He offered me some hot chocolate powder instead. "Es muy rico también," he pointed out.
"No gracias," I replied, before asking for the second thing on my list - an onion. "Una cebolla!" he repeated, before looking at me strangely, as if trying to figure out why on earth anyone would want to buy an onion. No. No onions to be had either.
He really looked sad at this stage, as if he'd failed as a shopkeeper by not having the necessary goods in store. He asked what I wanted an onion for. To cook, I replied.
"¿Para cocinar?" he repeated, as if he still couldn't believe it.
"Si."
He then asked if half an onion would be sufficient, that he had an onion he was going to use for his dinner, but he would gladly give me half. Wait there, he ordered me, before disappearing into a back room. He returned with half a large onion which he proudly placed on the counter.
"Para ti," he proclaimed. He then told me he is making lomo saltado (a beef stir fry, mixed with onions, tomatoes, chili and chips, usually served with rice), and that he would be happy to share it with me too. "Do you want some?" he offered. 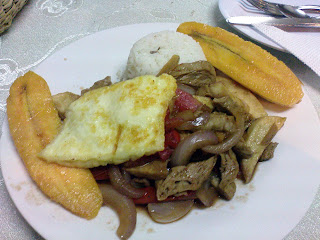 Jaysus, I couldn't eat the poor man's dinner! I politely refused. "No gracias." I looked around to see if there was anything in the shop I could actually buy. In the end, just to avoid leaving the shop with nothing but half the old man's onion, I bought another bottle of water, despite us already having about 20 litres at home.
Later, I went out to eat anyway. S/. 5 (about €1.25) for a starter, main course and refresco. As a tribute to the old man and his generosity I ordered the lomo saltado. It was good, but I'm sure it wasn't as good as that which I could have been eating.
Labels: Nazca Perú