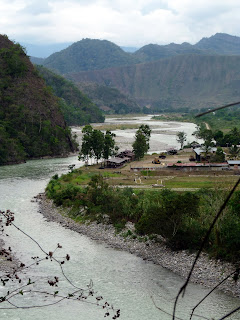 La Merced is a bustling bumbling jungle uncivilisation; a collection of streets, alleyways, buildings, cockroaches and people, all randomly thrown together on the side of a hill to create an ill-formed feeling of security from the surrounding wilderness. Three-wheeled motorbike taxis (tuk-tuks in other countries) nip in and around the main square, beeping of course like their big brothers in cars, but thankfully only with little motorbike beeps. 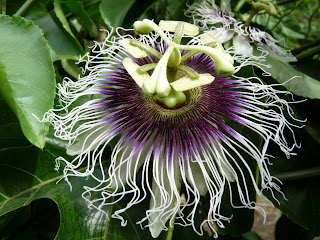 A surprising number of Chinese restaurants cater to local hunger, a sign that even in the furthest corners of remote, China is slowly taking over the world. Even a pair of shoes, made by a Peruvian company, and picked up by me in a Peruvian shop, had the obligatory "Made in China" sticker on it. If even the Peruvians are saving money, sending their shit to China to be made, what hope for the rest of us?!

(Incidentally, I also learned that "Made in China" actually means Maggot in China auf Deutsch. A source of great amusement to Germans when examining goods they would otherwise purchase. Sounds like a great adventure for such a little creature, perhaps sending postcards to the maggots back home. I might revisit this in a later post when back in Deutschland.) 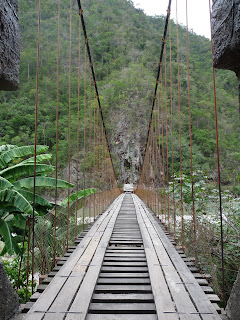 Thoughts of commerce, world trade and economics were forgotten when we went on a trek to El Borgoña, a waterfall we reached after hiking along a trail beside the valley, 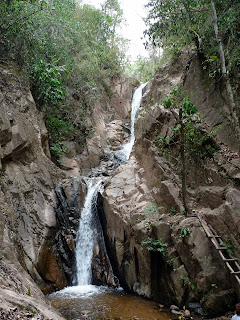 over rocks along a river-bed, and then through the river itself, clambering over rocks and negotiating gushing water torrents as we battled out way onwards. It was, we were told, El Ruta Indiana Jones, but I was unable to ascertain what connection, if any, our route had with Mr. Jones. We did cross an impressive rope-bridge over a raging river below. Butterflies, a few vultures, a frog, and a wonderful valley vista to be seen but no other wildlife. No snakes, tarantulas or anything like that. Just as well I suppose. We raided an orange plantation (an orangeage?) for fruit on the way back. Just for the hell of it. And vitamin C of course too. I'm sure Indiana would have approved. 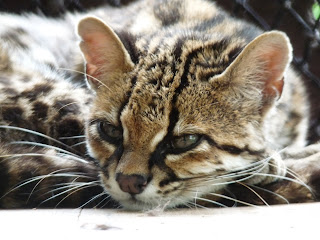 Pictures of La Merced, including waterfalls on our hike to El Borgoña and depressed local animals in cages for tourists' amusement, can be seen here: http://picasaweb.google.com/faheyc/LaMercedAndTheRoadToIt#
Labels: Amazon China jungle La Merced Perú