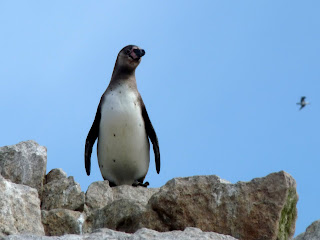 We survived the birdshit islands without one drop hitting our heads! It was hit and miss there for a while though (more miss than hit obviously) but we returned from the Islas Ballestas with nothing more caustic than the guilty conscience of a well-fed uninvited guest.
For half the promised hour we bobbed up and down like tourists in a boat, mouth's natural urge to open firmly resisted in the interest of flying shite. The amount of birds was incredible! They were everywhere. Every nook, every cranny, every ledge, above us, beside us, all around us! Feathers flying left right and in between.
I'm no expert on birds (feathered or otherwise), but I was told there were cormorants, boobies, pelicans and all sorts of others whose names I can no longer remember. There certainly were a lot, whatever the hell they were.
The only ones I was interested in were the penguins, and I'm happy to report they actually exist outside zoos! What they're doing so close to the Equator is a mystery to me, but Humboldt penguins were cooperatively waddling and hopping around the lower ledges around the islands, throwing the odd envious glance to their feathered cousins actually flying above them. 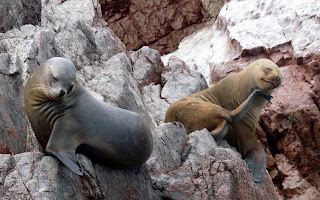 Adding to the sense of excitement was huge herds of sea lions, bellowing and guffawing as if a GAA match, flapping and fighting as if at a Waterford GAA match. Thousands of them were crammed onto one beach. Some of them vacated for the water before we arrived, Waterford fans before the final whistle. Don't worry lads, your time will come.
The Islas Ballestas are harvested every ten years for their stacks of bird shit, guano, which is a lucrative crop shipped to north America and Europe for fertilizer. The nearby Chincha islands were the subject of the Guano Wars with Spain in 1865-66, while Chile also took over Perú's guano-producing islands at some point or other. 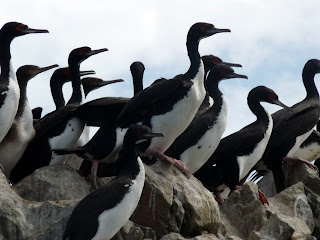 On our way to the islands we stopped to look at a giant candle-holder etched into the sands by the ancient Paracas culture. Evidently nothing better to do. Scientists and experts still row over what it means. Don't ask me. Crazy Paracans.
We went to have a look at their reserve after the islands tour. The Paracans themselves were long gone of course, conquered by the Waris who were in turn conquered by the Incas, but the peninsula on which they based their culture is now protected, despite being nothing but a desert. I wonder if they found gold or oil in it would they bother protecting it. (What "protected" actually means is another thing. It seems cars and buses can simply drive in willy nilly. I actually mistook lines in the sand for more crazy Paracan etchings until I learned fishermen sometimes take shortcuts through the sands.)
In any case, there we saw a flock of flamingos become a flock of flamingoes when they took off just as another bunch of tourists arrived to gawk at them. Perfect timing. 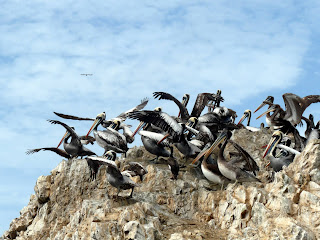 We also saw some unimpressive fossils which may or may not have been just weird rocks. The cliffs were impressive tough, as was the sight of the sea crashing against them, and the evidence of erosion all round.
But what the hell. I saw real live wild penguins today. Everything else is just scribbling in the sand.