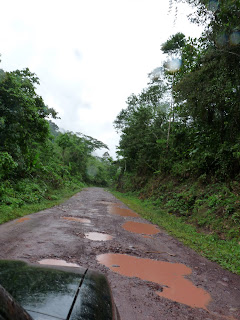 In fact the only thing worse than the road was the music, the noise of which we had to endure for almost ten hours. I am now convinced Peruvian music is the worst in the world. Certainly worse than any shit I've ever heard before. If it's not pan pipe shite, it's even more tortuous. We left at 5 am (an hour after scheduled departure time) when we were subjected to a strange mix of Japanese video arcade music, tinny electronic noises, combined with a woman screeching like a goat recently impaled with its own horns. No correlation between words, tune or music, if indeed any of those words could be used in describing what can only be described as utter shite.
If lampposts were offered the gift of hearing, they would return it on learning they would have to listen to it. Utter shite as I may have said before. I felt like driving my foot through the CD player, particularly after the third playing.

The only thing worse than the music was the stench. Wherever you go in these countries (Central and South America), people are sending their chickens on voyages too. Every journey is accompanied by boxes of swawking and clucking feathered feckers, craning their necks out of their cramped cages as if to see if they're there yet. I don't know what the obsession is with sending chickens on bus journeys. 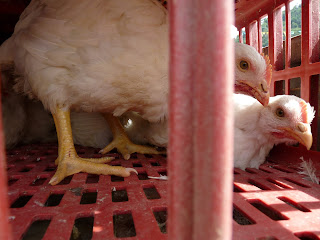 If they're on every bus going in every direction, then why don't they just keep the chickens where they already are? Surely the arriving chickens are just replacing the departing chickens. As if their owners are trying to show them the world from the confines of their cages.
In any case, the stench of our accompanying chickens was fowl. The entire back of our pick-up truck was taken up with boxes of the creatures, all crammed in like chickens in cages. The stench was unbearable. A putrid assault launched on the senses every time the truck braked or slowed down, to send wafts of evil foulness forward in our direction. My clothes still stink from the vile stench today, despite being aired and rained on since.

But it was a spectacular journey. Ignoring the smell and the music, the sights were breathtaking, especially when we negotiated the last of the mountains and could see the flatness of the jungle canopy below, the Amazon stretching for miles and miles, as far as the eye could see.
It had been a tricky drive to get there, great chucks of the track literally gone and washed away in places, the heavy rain inducing earthfalls and landslides down the steep slopes to jungle floor below. 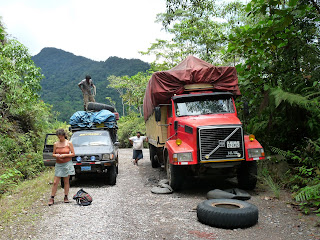 Our driver aimed for every pothole he could find. He didn't have to look for them either. Myself and Jenny shared a seat in the front, and I had the joystick up my arse for most of the journey. But the driver didn't care. He was huge, with about nine bellies. Said he was 25 but looked about 50. He was almost bigger than the truck itself.
We almost got stuck at one point, the wheels on the 4x4 spinning in the muck up a particular incline before three local boys came to the rescue. After holding our tubby driver to ransom for one Nuevo Sol (1 S/. = about 25 cent), they did something to the wheels and we were able to spin our way up the hill. 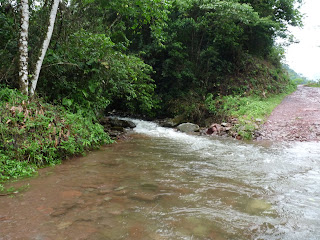 A journey for the hard of hearing and hard of smelling, but spectacular nonetheless. How or if we get back is another thing altogether.