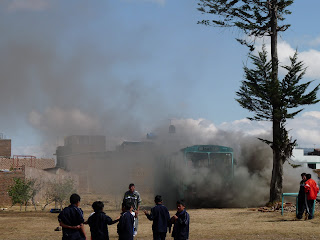 Another momentous day at the orphanage, as we accompanied the niños on "El Paseo" today. A trip to the countryside to give the poor feckers a taste of life outside the confines of the high walls which normally keep them in.
Again, there was palpable excitement in the air as we arrived in time for the outing. It nearly didn't happen however. Jump leads were needed to get the old school bus started. It took about an hour, after which great clouds of black smoke hid the bus from view. We finally had a running engine, even if we couldn't see it. The kids bounded on. Happy to escape lecciones for the day.
Everyone went. It really was a communal affair. Three dogs were also brought to share in the excitement.
The kids chattered excitedly and looked outside as the real world whizzed past the windows. Mountains, trees, fields, farms, cows, donkeys, a black pig. Jonathan delighted to tell me what everything is in Spanish. (I'm learning more from the kids than they are from me.) 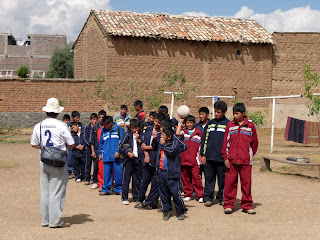 We parked up and all bounded off the bus. Time for fútbol! Teams were duly made, and soon I was subjected to cries of "¡Kiwi! ¡Kiwi!¡Kiwi!" everytime I got the ball. I tried pass to all of them but there was only one ball, leading to inevitable disappointment.
Those who didn't play fútbol scampered up the mountain forming the impressive backdrop behind, no doubt with Gonzalo's warning to watch out for poisonous spiders still ringing in their ears. He had been deadly serious. I guess he didn't fancy a trip to the hospital. Having seen the medical conditions here, I don't blame him.
Two hours later we were brought to a swimming pool in the middle of nowhere. La piscina! The name is not an invitation to piss in it, although some warm urine might have helped. The water was freezing! It would have skinned a polar bear. Must have been imported from Patagonia. I dived in but could only stand it a couple of minutes. I selfishly left Jenny and Jodie to teach some of the boys to swim, while I shivered and encouraged them from the safety of my towel. There was no way I was getting back in!
A couple of unfortunate lizards were caught and thrown into the pool. I'm sure the cold killed them before they drowned. 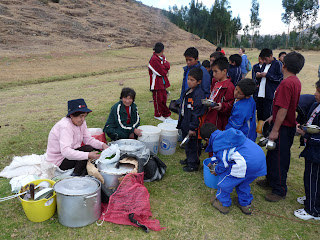 Afterwards we were brought back to where we had played fútbol earlier. Time for lunch! The boys queued up with their tin cups and bowls like a chain gang, while an old woman spooned out great bowlfuls of papas, rice and spaghetti. Every scrap was eaten.
Then it was time for fútbol once again! The sun was unforgiving, and the oxygen scarce, but still I ran around as if possessed. Jenny scored a goal, before wisely deciding enough was enough. Of course, I never know when enough is enough, and ran and ran until it was mercifully time to go home. I'll sleep well tonight.

Pictures from El Paseo and others from the orphanage can be found here: http://picasaweb.google.com/faheyc/TheOrphanage#
Labels: Fußball Huancayo orphanage Perú volunteering