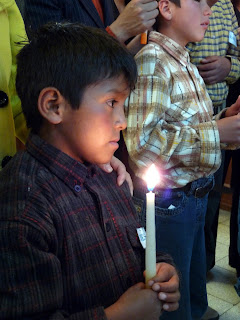 Twelve of the niños of the orphanage were baptised yesterday, and I was lucky enough to have been invited to share in the celebrations and excitement. In truth, there was great excitement for this was probably the biggest event to have taken place here in many months.
They even washed the clapped-out school bus the day before. Heaven forbid the niños could be taken to the Iglesia in a dirty bus. Despite being clean, the bus itself was hilarious. You could see the engine through gaps in the floor boards; you really had to watch your step as you picked your seat. A giant wheel sat at the end, while the engine pumped noxious black fumes into the cabin through the gaps in the floor. 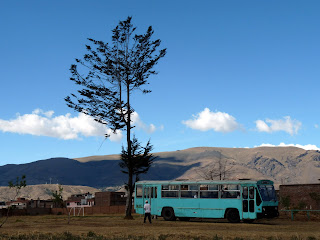 All the adults, staff from the centre, wore their best. Shiny suits and mirror-shined shoes for the men, high heels and stripey suits for the women. Then the chicos boarded the bus. Faces scrubbed, plaid shirts, trousers without holes or rips, belts, shoes with laces. Hair stuck to their heads with gel. Their heads as shiny as the polished shoes in which they could be seen.

Gonzalo, the head honcho and father figure for the children, was in mother hen mood, tut-tutting and clucking as he went around to each niño in turn, combing their hair and checking their ears for dirt. The niños themselves were happy just to lave the orphanage for an hour.

On arrival at the church they all bounded out of the bus, but then there was a delay. Marco Antonio, one of the "chicos especial" had to be helped with his trousers. The poor fella was obviously overwhelmed to be out in the real world, and it took Gonzalo, the bus driver and two of the other boys to help him fix his trousers, fastening his belt good and tight so there could be no unfortunate incidents in the church. 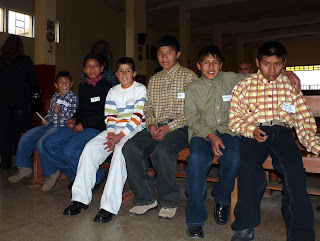 Inside, Gonzalo discovers the batteries in the school camera are flat, so myself and Jodie, another volunteer, are designated the official photographers. An actual official photographer, with a large camera around his neck and Kodak written on his back, was ignored, presumably because he had the cheek to expect to be paid for his work.
The ceremony itself went off without ceremony (despite it being a ceremony) until the priest offered the "Luz de Cristo" to the twelve niños. For the children this must have been the highlight - lighting their candles beside the bowl in which they had just had their hair washed. The priest warned them about holding the candles too close to their heads, noting the amount of wax caked in each boy's hair would make them very flammable indeed. 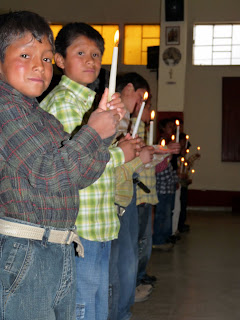 Fittingly, first up to receive the "Light of Christ" was Jesús, the nine-year-old nuevo Maradona I mentioned earlier. He lit the candle, a happy smile on his face as he looked on the flickering flame. Then it went out. He sighed loudly, the priest scowled. It must have been the first time the Luz de Cristo went out for Jesus.

Some of the kids had family members at the service. Poor Juan Carlos kept fidgeting throughout, looking behind for his. No sign of them.
Just before the end, when all was said and done, (they couldn't have timed it better), they came in. Mother, little brothers, cousin, grannies. A huge smile lit up little Juan Carlos' face. From despair to elation all it took was the sight of a someone he knew. 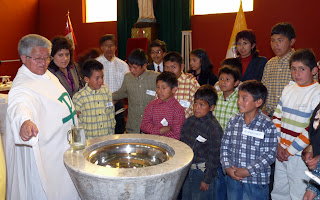 Some of the kids received presents, while others got sweets, crisps and biscuits.
Miguel ran up to me outside the church. "¡Kiwi! ¡Para ti!" as he handed me a little card. "Mi Bautizo" with some holy stuff, the date, the church, and a little picture of Mickey Mouse at the bottom. I looked at it for ages, delighted to receive such a gift.
On the bus back, they offered me more of their bounty. All tucking into sweets and crisps. Jhon, who myself and Jenny had been teaching maths (in Spanish!) that morning and the morning before, offered me some of his tortilla chips. "Son picante," he warned me as he waved his hand in front of his mouth. 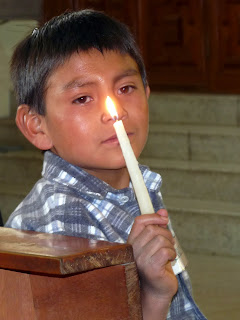 There was more consternation on the way back. Juan Carlos had about three of his grannies on the bus. One of them freaked out and demanded to be left off. "¡Fuera! ¡Fuera!" The bus stopped. She ran off. Juan Carlos after her. Eventually he coaxed her back on, while Gonzalo spoke with the mother.
Yes, I know, I don't know what Juan Carlos is doing in an orphanage either. His family was huge. Very traditional. Obviously campesiños. The women has socks pulled up to their knees, knee-high skirts up to their bellies, and big thick woolly cardigans. Hair tied back in plaits. Strange faces. The granny which ran away had just one tooth directly in the middle of her upper gum. Not even one of the two front teeth, (unless they had merged), this was just one solitary tooth which had obviously taken over from the others.
They had brought huge bags of stuff with them. I presumed they had been selling their wares from the mountains, but after more ceremony at the orphanage, with everyone sitting on benches in a circle, and after trays of biscuits, sweets and cake had been offered to everyone to the accompaniment of loud music from the radio, a plate of chicken and papas (potatoes) was placed in my hands.
I looked over and one of the three grannies was sitting on the ground in the corner, surrounded by big sacks of stuff, spooning papas and chicken out of a big pot. 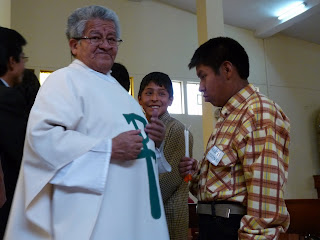 Just as we were making our way to leave, explaining that it was getting late, another huge plate of stuff was placed in my hand. A small claw attached to the end of a lump of meat served on a bed of rice with two types of papas.
"Cuy," explained one of the women from the orphanage. Guinea pig! I ate it tentatively, but found it a bit chewy to be honest. I guess there's a reason people don't generally eat rodents.
The kids ran around meanwhile, as if mimicking the rodents who just found out their ultimate fate. Delighted to have so much diversion and excitement. Babies squealed and the niños introduced us to their guests. Delighted we were there. We took pictures and they asked us to take more. Then they took more themselves. Juan Carlos' family posed for one, and demanded I make a copy for each of them. The woman with one tooth said something but I've no idea what. 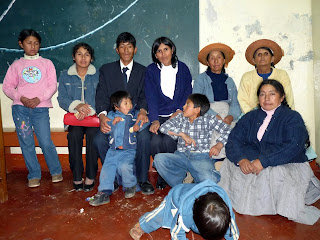 Organised chaos continuing around me.
What a day. Definitely the highlight so far.