Huaytapallana didn't happen unfortunately. The idiots who supposedly organised it for us didn't actually organise it. 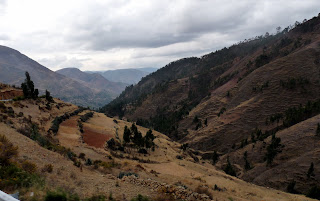 They couldn't even organise telling us they hadn't organised it. Such is the way with idiocy.
In fairness, it was as if fate decided we shouldn't go. A bad dose of the runs had put the runs on our plans to climb to the glacier the previous Saturday. I'm happy to report that problem has since been sorted out.
So we left Huancayo. Not before our hosts, the ones we'd been paying $170 a week so we could work in the orphanage, outrageously tried to charge us another $50, a fee for their "services" and final insult of a charge for two extra days. Despite us not staying two extra days! I told them in quite certain terms where to go. 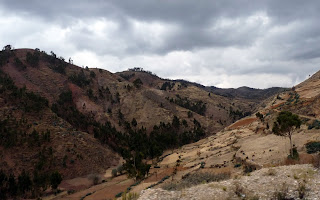 The journey through the Andes to La Merced was spectacular. We saw them as they should be seen, not a mine in sight. It was one of those old buses, so you could slide over the window and stick your head out like a dog. Great! I tried keep my tongue in my mouth as I soaked up the sights. Curved flatness between the mountain tops as we crested the heavens. Soft khaki scrubland, electrocuted green tufts shocked upwards in clumps. A herd of alpaca scattered before us, white tails up and away.
Then the descent began. Hairpin bends after hairpin bends. Dizzy angles. Trees, grass, foliage. Lushness! Greenness! The richness of vegetation! No shortage of water apparently as plant life competed for living space. Paddy fields and haphazard villages scattered en route.
The Andean hills climbed ever higher around us as we made our way down towards the jungle, mountainsides looming precariously above us. We drove along roads cut into their sides. Rocks and boulders littered the side of the road, brought crashing down by chance or by nature, who knows? I wondered if a boulder would come crashing down on our little tin bus. Not much chance of survival. Thankfully none fell, and hours later one could really hear the sounds of the jungle. Bugs and critters with feck-knows how many eyes making all manner of noises. Dusk was falling and the heat was building. In the darkness we could see nothing. Shapes of trees perhaps. Things. We drove on. Then the bus turned off. Down a dirt track. Suddenly we're driving through water. We're driving across a river! I wonder if we're going to make it at all. A couple of hours later however, we pull into La Merced. We'd made it!

Our hotel is a classy sort of place. The kind where you can scrape your name on the walls. Toilets without seats, dark dingy corridors. Cramped rooms. Cold showers but that's a blessing in disguise. The heat necessitates them. Inca steps higher than they're wide. Stinking co-residents, only slightly worse smelling than the toilets. But it's cheap! Just four euro a night. Jenny found a creature in her bed this evening however. A little wriggley fucker. We're leaving in the morning. 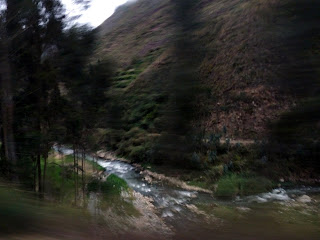 We're going to proper jungle to be precise. Not really wild enough here. After all, they have internet. Tomorrow, at 4am, we're starting out journey to Puerto Bermúdez. There are no roads so we're taking a truck through the jungle for a journey which will be between seven and 12 hours, depending on weather and track conditions. Some tribe of indians live there, as well as all manner of creatures. More Amazonian than this part of the Amazon. Amazonier. Sure what the hell, we may as well.
Labels: alpacas Amazon jungle La Merced Perú volunteering