The Andes are majestic, no doubt, but I'm not sure they can be described as beautiful. Incredible definitely, awe-inspiring too, but beautiful would be hiding a horrible truth.
We got the view which is never shown in tourist brochures as we took the bus from Lima to Huancayo. A seven and a half hour journey reaching a height of 4,800 metres. Breathless views even without the oxygen deprivation.
Despite the proximity to the equator, snow and ice graced the tallest peaks as our insignificant little bus trundled on meekly just below. We peered out the windows, contemplating the jagged rocks, the unfriendly sheer cliffs, the remote wilderness too harsh for normal humans to endure.

Only money could bring a man to such an inhospitable place, and, as it turns out, there's money in them thar mountains! 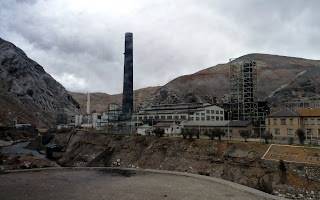 Copper, lead, silver, gold and zinc to be precise, so much of it that mining accounts for most of the country's exports. ($14.7 billion in 2006).
We passed a number of mines en route, each bigger and scarier-looking than the one before. Huge chunks were missing from mountains, their sides eaten away by massive industrial machines owned by companies in countries far away.
La Oroya was a blackened evil-looking place, full of smelters, pits, chimneys, pipes and mounds of Jaysus-knows-what. It has been dubbed the "Slow Chernobyl" due to the severe environmental impact of the mining operations there.

After passing one sinister-looking operation beside a river, (the road followed the path already made by the river), I noticed that the river banks after the Doe Run Peru were blackened on both sides. 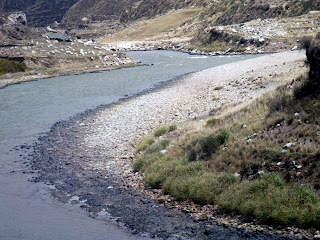 Whatever shit they were using to extract the precious metals from the rock was being pumped directly into the river. An hour after passing the mine, the situation was the same. Contaminated black rocks lining the water's edge as it continued on its poisonous course. There wasn't a sign of life to be seen anywhere in that desolate land. Not even a stray bird. Nothing.
(I since learned the river is home to incredible levels of cyanide, lead, arsenic, copper, cadmium, mercury and zinc, and that acid rain is responsible for stripping the surrounding mountains and hills of àll but the hardiest plant life. Bare, blackened rock to be seen for miles around.)

Netto, our host in Huancayo, told me the mine has actually been temporarily closed due to environmental concerns. A permit needs to be passed by the MEM, whoever they are. Apparently there's been a bit of a hold up, and his brother-in-law, who worked there, has been let go.
"It's very bad," he said wistfully, but I wasn't sure if he was talking about his brother-in-law's job, or the pollution caused by the mine.

It's very easy to preach about the dangers of mining, and the environmental impact of same, but when faced with a choice between the environment and putting food on the table, the latter will always win. These miners have absolutely nothing. Not even their health it seems. It remains to be seen if the Peruvians can find a way do both.

For more pictures of the spectacular road to Huancayo, including the environmental devastation, go to: http://picasaweb.google.com/faheyc/RoadToHuancayo#
Labels: environment Mining Perú pollution