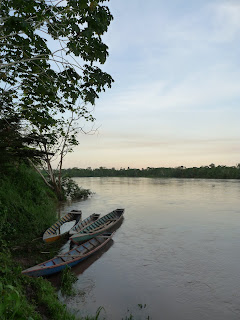 I had high hopes of adventure when we set off on our Amazon hike. The rain-enforced delay to our departure just heightening the sense of excitement and expectation. The Amazon for Jaysus' sake! Loads to see and encounter!
We were accompanied as we set off by a Swiss guy who will forever owe me S/.7 and Achilles our guide. Unfortunately, his heel happened to be his inability to find any animals.
We gazed around expectantly as we set off in our motorised canoe, the dark clouds threatening to open up again as they had been doing all night and morning. Such is precipitation in a rain forest. A couple of ordinary birds but nothing else exciting. Never mind. An hour later we landed on wet land, and took our first footsteps into the lush green jungle.
Achilles, who was armed with an impressive machete, cut and hacked his way through before us. Seemingly determined to deforest the damned jungle before our eyes, he chopped down everything in our path. And several things off it too. 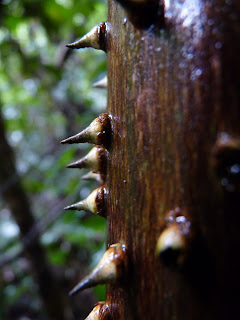 Meanwhile, he stopped at random trees and gave us forgetful names for all of them. While very large and impressive, they all looked the same, and for all I know he just made up the names while hoping for a wild animal to make an appearance.
He had a strange way with trees. He would at them fondly, bemoaning the loss of the forest to loggers and foreign companies, before giving it a few friendly chops with his machete. As if trying to toughen them up for the inevitable chainsaws to come.
He chopped down a few more small trees with his machete. One he used as bridge to help us over a flooded area. Then the rain started again...
We learned one tree would fetch S/.50 on the market, about $17.50 or €12. A pittance considering their size and the length of time they take to grow. Signs of deforestation (apart from Achilles') were already evident, albeit not on the scale just across the border in Brazil. 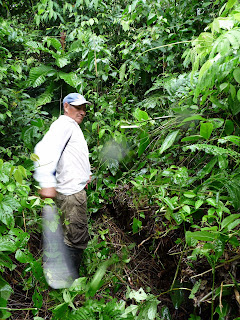 Meanwhile the rain was really pouring down as we traipsed around in circles, Achilles chopping and hacking and frantically looking around for any sign of life. Anything. We would have been happy with anything. Never mind the jaguar, crocodiles, sloths or monkeys, a snake would do. Even a parrot. A feckin' spider. Anything. 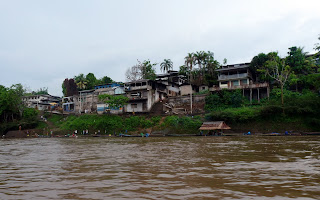 But we found nothing. Rien. Nichts. Nada. I also learned my new trekking shoes, the ones I bought because they say "waterproof" at the side, aren't actually waterproof.
We returned to our flooded canoe as the rain continued to pour. Only an hour or so back to the hut. Sure it wouldn't be the same if it didn't rain.

For more pictures of Puerto Bermúdez and the trek (no animals were filmed in the making of these pictures), click here: http://picasaweb.google.com/faheyc/PuertoBermudez#
Labels: Amazon jungle Perú Puerto Bermúdez