For the last five days solid I've had a headache. Since we arrived in Huancayo to be be precise. You'd think after having the same headache for so long you'd get used to it. But you don't.
The altitude is definitely a problem. We're 3.3 km high here so oxygen is scarce. 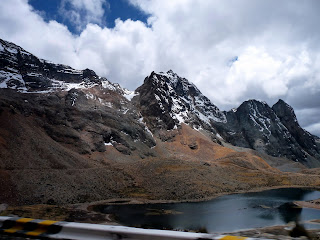 On the way here, we reached a ridiculous height on 4.8 km on the bus from sea-level Lima. At the time I really noticed it. Sharp breaths, and more of them; the body doing its best to gulp in what it could. On arrival here, breathing was still more pronounced, (as it has been since), but dizziness and lethargy could be added to the mix. It's very hard to walk and talk, while talking on the phone is a struggle.
That night, Sunday night, I could not sleep for ages, despite being absolutely wrecked, as my heart was pounding so fast, working overtime to supply oxygenated blood to the rest of my body.
The headache I attributed to the deafening levels of the TV on the bus on the way up here, but it can no longer be blamed - not after five days. I checked the Lonely Planet guide and it said if symptoms last 24 hours descend immediately by 500 metres and see a doctor. Altitude sickness can be life threatening. The drugs it listed to combat it are either steroids or cause impotence. I'm not taking either of them. A random book on Bolivia which was lying on the table gave it a week, after which it is time to seek medical advice. 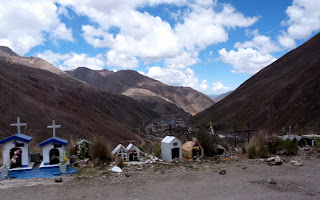 (I think; I haven't been able to find the book since.)
I've even turned to cocaine to help. Coca tea, made from leaves of plant used for cocaine, is supposedly a cure. I've been gulping gallons of it into me today. Haven't noticed any of the supposed side effects though. Funny that I'm taking cocaine tea to deal with the problem of being high. Like most things on this trip so far, it's usually the other way around.
Labels: altitude sickness Perú Tea