On Wednesday we're finally leaving Huancayo for La Merced which will be our first stop on the way to the Amazon. Not sure what internet access is like in the jungle so this will probably be the last post for a while. 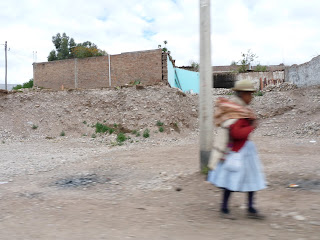 I certainly won't be sorry to say adiós to Huancayo. A shithole if ever there was one. At least I didn't feel I was going to get shot, like I did in Guatemala City, or kidnapped like I thought I would be in México City, but they're about the only good things I can say about the place. I would actually sooner go back to either of the other two.
I did meet some nice people here, but statistics will guarantee at least a few nice people no matter where you go. In any case, most of the nice people I met here were foreigners. The locals, I generally found to be quite rude towards outsiders. (There were exceptions of course.) So much for Andean hospitality. We'll see how we get on in the Amazon.
Labels: Amazon Huancayo Perú