'Tisn't a good start. Jenny's wallet departed company from her somewhere between Berlin and Madrid. Lost or stolen it doesn't matter; it left without saying goodbye. 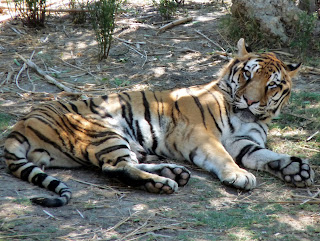 Our flight to Lima was only 13 hours 45 minutes late. Nobody bothered telling us so they put us up in what claims to be Europe's biggest hotel. El Auditórium. Sounds good but with a name like that it's bound to. The free buffet was great though. We made pigs of ourselves. I probably made three or four pigs out of myself. But fuck it, it was free, and no Irish or, apparently, East Germans ever turn down something if it's free.
I deliberated long and hard about stealing the towels but decided against it. Free or not, I didn't wanna have to cart them around the Andes.
Anyway, we eventually made the plane, but only after negotiating one fuck up after another. They even neglected to tell us when the plane was leaving after it was delayed the second time, leaving us just 15 minutes to get to the airport before it was boarding. 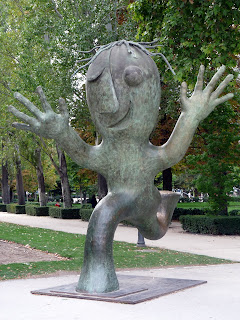 As I type on this handheld device I'm not sure I'm allowed use, I can tell you we're now 11,164 metres high, 6,523 km from Lima and somewhere to the left of Mauritania. I can also tell you we are sitting directly behind a row of babies, all screeching and screaming as if Guantánamo inmates. The noise is unbelievable. Their lungs must be bigger than their bodies. The guy in front is actually changing his little monster's nappy as I write this. On the seat! The stench of shite is unbearable.
Never fly with Air Comet if you can help it. Such a bunch of incompetent half-wits I've never come across before. No tickets, no meal options bar one which was shite, no communication, no on-time flights, no clue. You even have to pay to watch the onboard films or access the entertainment. €7! On a transatlantic flight! 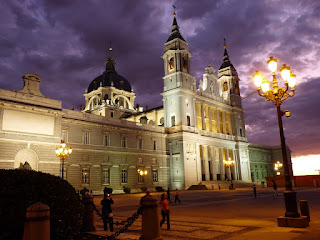 Enough. On Madrid itself, where we spent the last couple of days, I can tell you nothing I haven't written before but that there is an overabundance of statues of fellas on horseback in the city. Why they need so many stone horses is beyond me.
I was gobsmacked to find the statue of the bear leaning against the apple tree, the very symbol of the city, was ripped out of Puerta del Sol, apparently to make room for the hordes of pedestrians who trundle through the city centre. For me, that bear is Madrid so to uproot him like that is unforgivable. 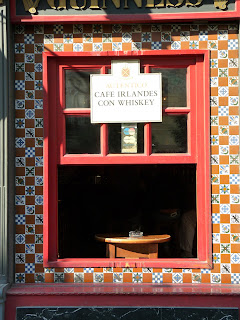 At least the parents were happy to see and spend time with us. My mother even joined us as I brought Jenny on a rowing boat in Retiro. Very romantic. Later we had time to ourselves as we sat under the old lamps in Plaza Mayor. Classical music spilled out towards us over the cobblestones as we took in the ambience of the 17th century grand square. (Of course, there's a fella on a horse in the middle of it.) Suddenly Jenny leapt up. A couple of friendly cockroaches had nudged her thumb. So much for romantic notions.

But now, despite the incessant wailing and screeching going on around me, it's time to finally look forward to Perú. I've been doing research, and found out all the important facts. Firstly the country is home to almost 4,000 varieties of native potato. I look forward to trying all of them. Also on the menu apparently is roast cuy (guinea pig) and monkey soup. Yum!!
I also learned bird shit (guano) accounted for 80 per cent of the country's income in the mid-19th century. Presumably now they have other exports. I suggest they start with their screaming babies, at least for the duration of our trip.

Obviously, if you're reading these words, it means we survived the flying screaming crèche and landed safely in Lima. More news in due course. Just too much to write and too much to explore to get into all that now. All in its own good time. Which, I'm happy to report, we've been having since we got here.
Labels: Perú