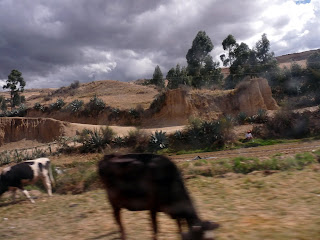 Well, we made it to Hauncayo. I'll write more about the journey to get here and the town itself later on.

Plans have changed already. It seems we won't be teaching the little Wankas for three months as originally planned. After being picked up by our hosts at the bus station on Sunday evening, the ones for whom we volunteered, for whom we said we'd sacrifice three months of our lives to work and teach kids skills which might help them out of the poverty trap they find themselves in, we found out from other volunteers there was a charge of $85 per week to do so.
Our hosts, Netto and Elli, took us in for a meeting, during which they expressed their delight at having us for the following three months. Wonderful, we replied, but you never said anything about us being charged $85. Stunned silence. Didn't you see our website? they asked. We did, but we didn't see anything about fees. (It later transpired all the information about fees is under "contributions", a term which I had taken up to now to mean voluntary or optional.) 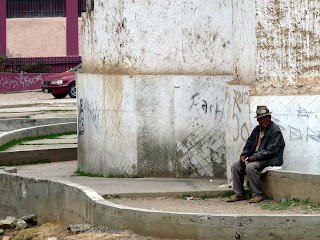 So for 12 weeks work, we'd have to pay $2,040!!!
Jenny had written to Elli, to tell her one of the reasons we were accepting the program was because we didn't have money to pay fees. Elli noted in the meeting that she thought "it was a bit strange". Not strange enough to reply to say, actually, there ARE fees.
The money apparently covers our accommodation and breakfast. $170 a week. We asked if we could stay somewhere else, an hostal or pension, but no, that's not allowed. The money also goes to fund the program, scholarships for the kids, expenses etc.
A double room with shared bathroom in a hostal in Huancayo would cost us $6 a night.
So we're staying just two weeks. We've come this far, we may as well do that at least. I'm not happy about it however. We're actually paying to work! It's usually the other way around.
From now on I refuse to use the term "volunteer", but shall be using the term "sucker" instead.
Jenny's very disappointed. I'm too pissed off with the whole thing to be disappointed. The organisation itself is a joke. In fact, organisation is a misnomer; there is none. Everything takes three times longer than it should, and I've no confidence at all that our money is being utilised to the maximum potential. 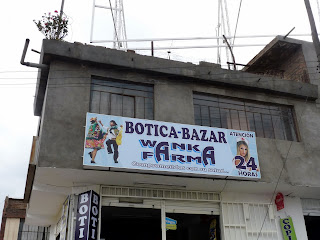 Promised hot showers are non-existent, and breakfast consists or two teeny bread rolls which wouldn't feed an ant.
The other suckers seem nice however, and despite being unorganised and hapless, I'm leaning towards the impression that our hosts' intentions are good. It's close though. The jury is still out. If I was on my own it wouldn't have had time to deliberate.

The whole shambles means we'll have to pay for accommodation somewhere for three months, something neither of us had budgeted for. Money is tight. I'm not sure if we can even last that long, and an early flight back to Berlin is still an option. 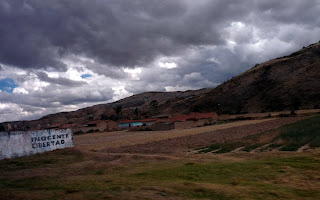 Today we went to the orphanage where we'll be working for the two weeks. First impressions were good. We met Gonzalo, the head honcho, and he was very interested when he heard I was a periodista. So, I've been put in charge of a class of budding reporters, to teach them how to write articles, find news, conduct interviews, put a newspaper together etc. It's the first time since we arrived in Huancayo that I've had a positive thought about this endeavor. Maybe I can do some good after all. The first lesson is in two hours. A pity then, they will only be for two weeks.
Labels: Huancayo Perú volunteering