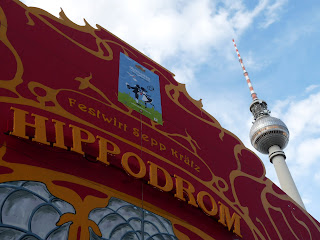 It's Oktoberfest! In September. I know, it doesn't make sense to me either. Very un-German to get their dates mixed up like that. I presume they just couldn't wait anymore. All that lovely beer just waiting to be guzzled down to the accompanying sounds of yodeling and Alpine folk music.

Normally left to the Bavarian beer-swillers of Munich, this year Oktoberfest has come to Berlin thanks to a giant tent set up in the shadow of the Fernsehturm outside the Rotes Rathaus. As if to tease the red rats inside. Oh, how they'd love to get their little paws on all that lovely beer!

I wandered into the tent by mistake today. Not realising where I was going or how I suddenly ended up in a giant tent with chandeliers hanging from a stripey ceiling. The Hippodrom, as it's called (clearly hippos the target market), had hundreds of tables and wooden benches full of raucous revellers boisterously cheering and clapping to the happy clappy sounds of music which could only be made possible by a band in Lederhosen. Ah, you gotta love the Münchkin music. No one else does. 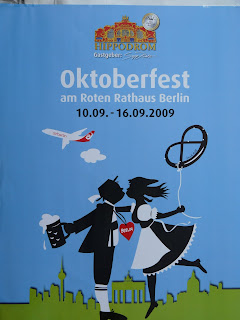 Waitresses bustled around with big jugs, not just their own; great pitchers of beer too. The traditional costumes are great, known as Dirndl. They display frontal assets proudly for all to see. Some of the girls only displayed their breasts to take attention away from their faces though. Although I'm open to correction on that point; I didn't see any faces.
Waiters wore ridiculous costumes featuring short Lederhosen, clogs and suspenders. The less said about them the better. (To be honest, I spent more time looking at the waitresses.)

Whatever one says about the Bavarians, their beer is damn good. My favourite in fact. It was €7.50 for a one-litre Maß (stein) which is a bit pricey, but I guess the Münchkins want the Berliners to pay München prices.

Their music on the other hand, is awful, but it was still good fun. A giant fat woman, who has clearly consumed far more Schweinsbraten, Würstel (little sausages), Knödeln and Käsespätzle than can be healthy for a normal human being, got up and yodeled her way into the hearts of the happy clappy revellers. A tent full of happy Germans. The best Germans of all.