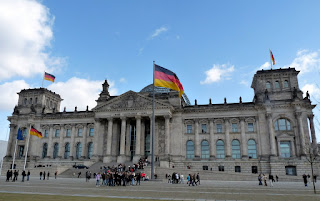 I was outraged to read mighty Germany "sent a signal to Ireland" yesterday ahead of the Irish referendum on the Lisbon Treaty next month. http://www.irishtimes.com/newspaper/world/2009/0909/1224254135724.html
Revised laws were passed by a large majority in the Bundestag to allow the treaty's ratification. It was Merkel's spokesman on European Affairs who then described it as a "signal to Ireland". Mafiaesque advice considering the timing - three weeks before the Irish go to the polls for the second time. A clear attempt to bully a favourable answer this time from a nation which has already said "No". What a fucking nerve. How dare they interfere in another country's affairs!

If there was ever a reason to vote "No", there is now. Thankfully there is a legal requirement in Ireland for such a referendum, or the spineless Irish government would have obliged Merkel and Sarkozy by passing it already, regardless of the will of the people.

This really makes me sick. It's laughable that voters are being asked a second time at all. Will they be asked again and again until a favourable answer is given?!

If I could vote in the October 2nd poll I would vote a thousand times "No". No! And fuck off while you're at it.
Labels: Ireland Lisbon Treaty