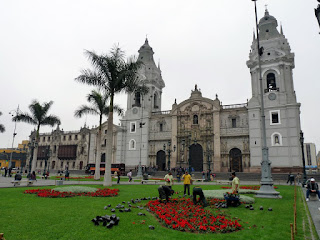 It was dark when we arrived in the Peruvian capital. Chaos at the airport. Taxi drivers fighting over our fare after we were left stranded by the "safe and reasonable" bus which didn't exist anymore. Presumably it met an untimely end. Pobre Urbanito.
We settled on the least dodgy of a dodgy-looking lot. Only one scar on his face. We waited for his promised taxi to turn up, and when it eventually did, battered and bruised, we plunged into Lima's traffic. Soon we learned where the car got its battle wounds. We surged forward, traffic to the left, traffic to the right, in front, behind. Cars, trucks and buses all jostling for position, beeping like crazy, a manic wave washing over the potholed and broken streets.
"En Perú this is normal," our driver laughed as he banged on the horn. Beep beep! Beep beep!
He pushed the car forward into minuscule gaps. One car mounted the grass verge to overtake a line of traffic, all beeping like mad. Red lights disregarded, as was a policewoman frantically waving at the madness going on around her, her shrill whistle drowned out by the car horns. Incredible noise. On we went. Clouds of dust obscured the view as we bounced over the broken streets. 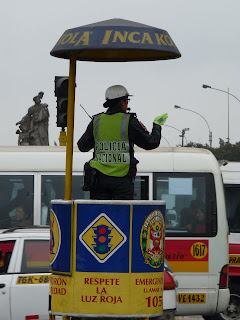 Broken buildings, ramshackle brick huts, half-built and falling down. Faded dusty adverts for products no one remembers anymore.
Suddenly spot lights appeared through a cloud of dust ahead. Like an alien spacecraft ascending over the brow of a hill towards us. Beep beep! Just another Lima motorist.

Motorists in Lima hit the horn more often than they do the accelerator. I'm not sure they even look where they're going. They just beep at stuff to get out of their way. Which it does not. It just beeps back. 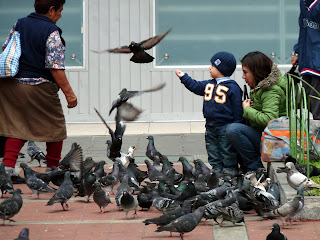 The horn is king. All cars carry scars of previous collisions, as if proud of their battered longevity, as if stronger for having survived. Lima's motorists are fucking mad.

The city itself is a dump I'm sorry to report. The aforementioned ramshackle brick huts do not look better in the daytime. Rubbish lines the streets, and acrid fumes from the city's manic traffic chokes the streets. Trucks, buses and taxis (which make up one in seven cars) belch out black fumes at will. 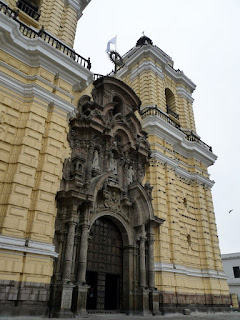 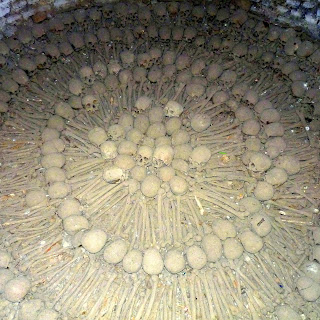 Only the city's colonial monuments are afforded a degree of pride. The Monasterio de San Francisco, despite the best efforts of various earthquakes to topple it, gave a glimpse of the city's former glory. Fittingly for a monastery dedicated to St. Francis of Assisi, it was home to a squillion pigeons.
It was also home to a squillion bones, buried in three levels of catacombs beneath. Skulls were neatly arranged in circles with femurs completing the designs. Some 80,000 people are estimated to have been buried here. People wanted to be close to God so they were keen to be buried under the church. Sure they were dying to get in! 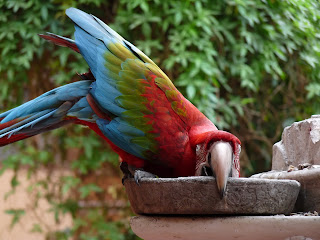 Today's inhabitants thankfully have different pleasures. They lined up in groups outside shops on the Plaza Mayor, watching TV and laughing at candid camera showing some poor fecker getting hit by a bull. The next shop had a smaller group gawking at a music video. It was hilarious to look at them. Their entertainment providing ours.