The Saloon is probably Frisco's most famous bar, definitely the oldest, and it claims to have "the best of the blues in the Bay Area". It withstood the 1906 'quake due to its strong timbers and was subsequently saved from the flames which devastated the rest of the city when firefighters did their best to save the prostitutes who operated upstairs. If they let the hookers burn, chances are they might have saved the rest of the city, but who's to know these things? I'm sure they weighed up all the pros and cons. 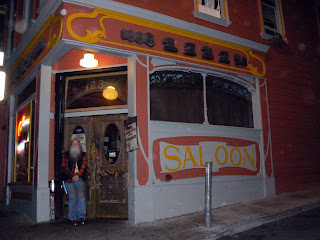 An old guy with two hairs for an eyebrow and a long bushy beard stopped us for ID on the way in, refusing to let us in when we had none. "I'm 31!" I told him. "I don't carry ID around with me anymore." (It's true. In Ireland the only people who carry IDs are those who are too young to drink legally. The only people who have ID proving they're legally allowed drink are, in fact, not. Once you're 18 you don't need to carry fake ID around with you anymore.)
Eventually, after telling him we were on holidays, and after he tried catch us off guard by rapid-fire asking us our dates of birth, (I hadn't had that since I was 17!), he let us in. "Okay, go on in, but if the cops come you have to tell them you lost your ID, you had it out here, okay?"
Jaysus, I'd say it was a long while since anyone asked him for ID.

San Francisco bookshops are wonderful places to spend a bit of time. After The Saloon we wandered over to City Lights bookshop where Jack Kerouac used to spend a lot of time which they reciprocated when the alley beside it was renamed in his honour.
I hope one day to write a book better than Jack Keruoac and have a street named after me. Even an alley would do. Instead of coffee though, I'll probably turn to tea as I thrash out a novel in three weeks. Three weeks? Better make it four if not four more.
Every book I touched in City Lights begged to be read. For some reason every time I'm in the US I end up buying books, and this time was no different as I splashed out on two. I had to leave quickly before I bought anymore. 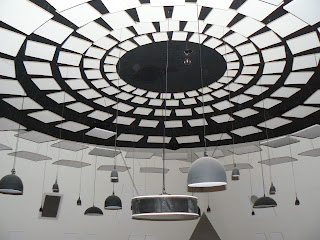 Fats brought us to The Audium the next day, for a far-out experiment with sound where some crazed scientist in a tweed jacket plays mad shit through thousands of speakers embedded in a giant egg. Sitting in this giant egg, you're enveloped in complete darkness as your man plays DJ with sounds from space and beyond. Or so I thought.
Sitting there in darkness, weird noises pinging all round me, I imagined what kind of mad shit I should be thinking of. "Dreams and impressions" I was told. The only thing I could think of was what kind of mad stuff I should be thinking. When I realised I wasn't thinking any mad shit at all, but was thinking of what mad shit I should be imagining, I was actually disappointed with the lack of mad shit. Weird noises continued to ping and warble around me. I guess that was when I fell asleep. Maybe I dreamt mad shit.
Immediate impressions did not make themselves immediate - we didn't know what to think afterwards. I know Fats was disappointed with our lack of enthusiasm. He'd been three times and is a huge fan.
Three nights later I told him I wanna go again. Maybe a seed was planted. It demands further exploration. Preferably awake exploration. Mad shit is always worth exploring. 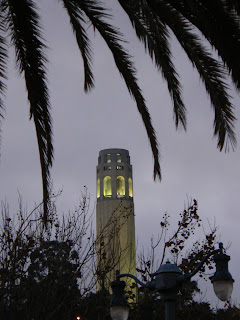 Fats (sometimes known as Captain Cabbage) was once told one never knew what type of car he was driving - it was always a different shape whenever he arrived. He's recently bought a new swanky car, one he'll be afraid to scratch until there's nothing left to scratch. I was afraid to get into the damn thing.
He's possibly the most un-politically correct person I know. He told us a story of passing a Japanese gym just the week before and seeing a black fella running out like the clappers, his jocks around his ankles, with a sack-full of cash in hand and "five little kung fu fuckers running after him in their pyjamas".
Asayo, his Japanese friend, rightly interjects at this point. "They're not pyjamas!" she protests.
It didn't matter. The alleged thief obviously wasn't in the right frame of mind for out-running ninja-wannabes and so they chased him, as Fats explained, "to kick five dans of shite of of him". 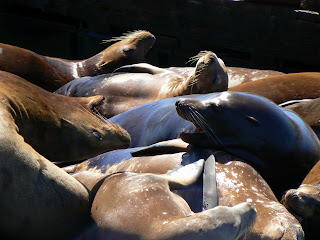 I've been introduced to Woody Guthrie thanks to Fats. Just his music obviously, not the man himself. What's that? I hear you say. You didn't know Woody Guthrie? No, I didn't, but I do now, and just for that alone, it was all worthwhile.

Fats doesn't particularly like people who want to save the whales. I, on the other hand, would never wish a whale any harm, not even a British one, although Sellafield is of course taking care of those poor fuckers. There are plenty of Save-The-Whale people in San Francisco, although I'm not sure how smoking copious amounts of marijuana is going to help.

On our last night in San Francisco I had a Bloody Mary. Jaysus! They should call it a Bloody Awful. Or I'll be Bloody Sure Never to Order Such a Disgusting Drink Again. I'll be sticking to mojitos from now on... 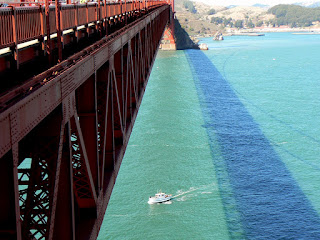 Alcatraz is fantastic, and deserves a post on its own, so I'll not be saying anymore about that for the moment, but the Golden Gate is overrated like most things pandered to tourists. It's not even the longest bridge in the bay! There are nice views of the city and all that but that's about all that can be said for it.
Far more impressive is the Bay Bridge itself, which is so long and impressive they're building it again. They'll be sick if an earthquake knocks it down but I've been assured they thought of that already, and are taking appropriate action. Always taking action these Americans. 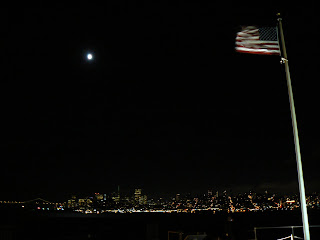 America is the land of superlatives. Everything is the biggest, best, most wondrous, awesome. I don't know how many times I overheard the word awesome from passing cell-phones. An awe-inspiring number of times.
The enthusiasm is great. The can-do attitude is very much an American trait. It doesn't matter if can't be done, or if can only be done badly, America will say it can do it, and expect to do it, even if a blind fool with no sense of hearing, touch or smell can tell there's no way it can be done.
Perhaps this enthusiasm is best epitomised by the gold seekers who flocked to a sleepy little-known pueblo called San Francisco in 1849 in search of fortune. Gold prospectors without enthusiasm are doomed to failure. There's gold in them thar hills! The guy who said "so what?" sure as hell didn't find any.

I'll leave the last word on Frisco to these guys. After all they're locals. They know what they're talking about.