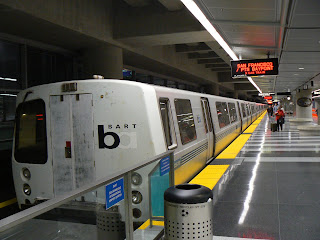 San Francisco's Bart is probably the coolest public transport system in the world. The trains themselves look liken they come from space. Sleek, long, groovy curved angles. Fast as fuck. They zoom under San Francisco Bay at frightening speeds. Seats are cushioned sofas which come out from the side, no legs at all, as if hovering above the carpeted floor. Yes, carpets on the floor! The comfort is unbelievable. It's almost impossible to prise yourself back out of the seat once you've sat down. The drivers are cool as milk. They announce upcoming stops in a long lazy casual drawl, also giving details of connecting trains at transfer stops, not without a keen sense of humour.
"The Richmond train is across the platform on the other side. That's the big white thing over there."

Oakland, where we stayed with our gracious hosts Fats and Tanya, is just across the bay from San Francisco. It has a bit of a bad reputation - people looked at us in awe when we told then we were staying there (much like Dubliners when they hear you're from Bray) - but we didn't have any hassle. We weren't shot, mugged or killed, and once we negotiated out way past the bums who hung outside the store at the corner of Broadway we were grand. "Welcome to the 'hood man," Fats said on arrival. 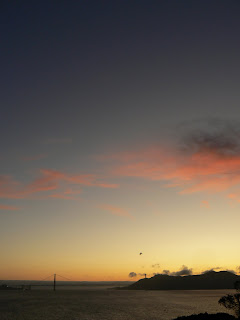 We were surprised by the lack of recycling options to householders. Everything fucked into the one bin. In Berlin there are about 40 bins in the kitchen and you need a mathematician to figure out which rubbish is supposed to go where. While bemoaning the lack of recycling options in America - "Jesus, isn't it terrible the way they don't recycle anything?" - I was secretly delighted to be able to just throw everything in one bin. "It's shocking alright, but what can you do?"
It was only the last couple of days when we asked Fats and Tanya what the story is with recycling.
"Of course you can recycle," retorted Tanya. "This is where the cardboard goes, this for the plastic bottles, glass..."
She showed us a load of different bags for various items under the sink. Ah well! I guess our prejudices from Dubya's America prevented us from even imagining there might be recycling facilities available. Typical Europeans. Polluting America and then giving out about American pollution.

The packaging on everything is frightening though. Even the fruit at JFK in New York was individually wrapped in cling film. Individually wrapped! We bought an apple which turned out to be the shiniest apple I ever laid eyes on. So shiny it could be seen from space, obviously genetically modified. I presume they bound it in cling film to protect the fruit vendor's eyes from the glare.
Everything is disposable. Everything. Coffee cups use half a rain forest worth of cardboard. (Some proudly proclaim "made from 25 per cent recycled material" so I guess they only use a quarter of a rain forest.) 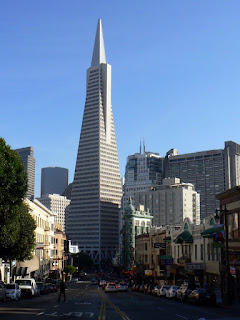 America is obsessed with the chase for the dollar. Tips are expected by everyone for everything. Even beggars want to be tipped if they feel they've done a good job begging. That means if you give them anything at all, they expect more as a tip.
It's also the reason waiters are falling over themselves to be nice to you. They'd wipe your arse for money. They can't let you eat in peace, but are constantly hounding you and cracking jokes to make sure you're enjoying your meal. I'd enjoy it a lot more if you fucked off and let us alone!
We wandered into a church by mistake. Even there, Grace Cathedral, visitors were invited to leave a donation. Not just any donation, but a donation of $5 was suggested. $5! To walk into a church! Needless to say they got nothing. I was tempted to steal a book out of retribution but I have no call for a heavy book of hymns.

We were asked on a few occasions if we would consider living there. Not an invitation as such, but more a point of interest. I think I may have offended Tanya when I said "no". The truth is I'm actually quite happy living in Berlin. Probably because I've been spending so little time here. 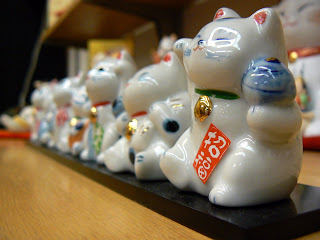 Japantown is a mad place if ever there was one. Full of teapots and porcelain cats with their arms up in the air. As if in surrender to porcelain dogs. But I didn't see any porcelain dogs. The teapots only had their spouts in the air of course. They don't have arms, not even Japanese teapots, despite their madness.
It was where I managed to eat a whole meal with chopsticks. It may have taken me 17 times longer than usual to eat a meal, and chopstick aficionados like Fats and his Japanese friend 麻代 金村 (Asayo to you and me) may have been laughing at me, but I still managed to eat it, whatever the hell it was. 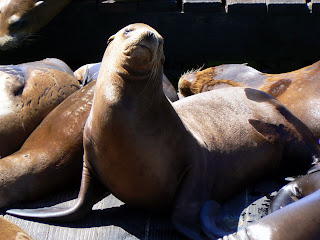 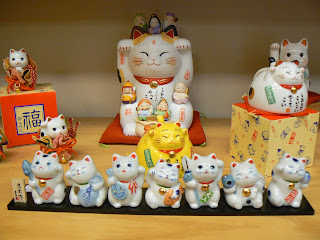