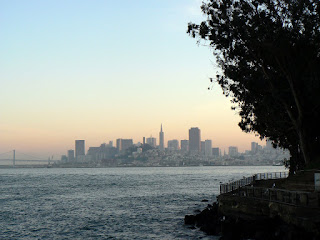 Despite too short a time in San Francisco, I was there long enough to form some rash, ill-advised, biased and contradictory impressions of life in the US, and California in particular. It was actually my second time there in less than twelve months. The city hadn't changed much since last November, if at all, but the fog had lifted. Mark Twain did not actually say the coldest winter he spent was summer in San Francisco, but that won't prevent me repeating it. Someone said it.

Enough about the weather. To the mis-informed observations. Everything in the US is bigger than in Europe, and that includes the fruit, which is huge, although I suspect that has more to do with genetic modification than anything else. At the farmer's market on Fisherman's Wharf the strawberries were the size of apples, the apples the size of watermelons. Fuck knows what the watermelons look like. Presumably they were too large to bring to the market. Cranes would have to lift them from trucks onto the pier. 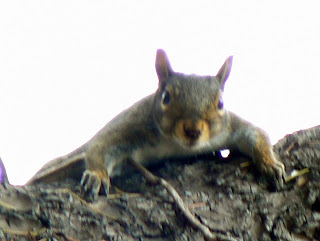 This genetic modification/manipulation business worries me. If you are what you eat, does this make me genetically modified? Have my genes now been modified? My jeans definitely have anyway. When in San Francisco, it is almost obligatory to buy Levi's for half nothin' in the city of their birth. $32.99 in Macy's. (€23.13 approximately.) They're about €80 here in Berlin! I bought two pairs.

I also bought a fleece but that was more on account of the aforementioned cold. The Outside Lands music festival in Golden Gate Park was feckin' freezing, despite the sun splitting the stones elsewhere in the city that day. Of course we arrived in shorts and t-shirts. People were huddling together for warmth in the evening.
Although I didn't notice any pigs, I thought it best to not to take any chances with flu and I paid more for a fleece than I normally would. Despite being fleeced I remained cold when Jenny promptly took to wearing it. Women are colder creatures than men and she's no exception. 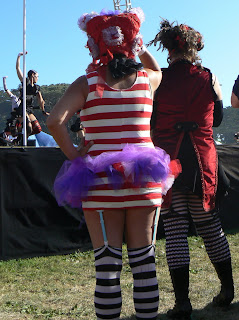 I wasn't going to be fleeced a second time so I took to clapping enthusiastically to The Mars Volta. I couldn't wait for them to finish their songs just so I could clap again. I clapped with both hands and feet.
Unfortunately Dave Matthews took to singing the same lyrics over and over while his band indulged themselves with never-ending solos. As if trying to stretch their show the requisite two-and-a-half hours for a headline act. Not much opportunity to clap. They promptly finished up just before 10pm without even playing their one hit.
Imagine a festival ending at 10pm! Probably why the organisers had a hard job getting decent acts to play. There was no camping allowed either, despite it being a three-day event. Then they had the cheek to have a VIP section for those foolish enough to pay more to hear the same stuff.
Delinquents had to show ID at the ID tent before getting a wristband permitting them the privilege of paying $7 for an under-sized beer. It was the first festival I was ever at where I didn't buy a beer. I wasn't going to be fleeced again.

Neither were other festival-goers judging by the smell of marijuana which wafted everywhere throughout the park. It was inescapable. In fact, it could be described as the smell of San Francisco. It was everywhere! Not just at Outside Lands (where I can see the ironic sense in stupefying oneself against the cold), but all over the city.
Of course, marijuana was made fashionable by the hippies in the Summer of Love but today's lot are a sad reflection on that. Scruffy, smelly fuckers, sitting around Haight/Ashbury (where the hippies of '67 used to hang out), hands out looking for freebies like moochers. 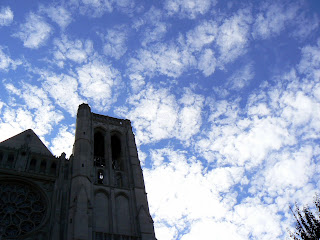 We did see one survivor from the original hippy era, with flowers painted on her cheeks. Driving a Mercedes and shopping in San Fran's most expensive supermarket though, it's debatable whether one can still call her a hippy. At least she was buying organic food and wearing a pretty flower-print dress. She did cause me to wonder about hippies. Does a successful hippy negate their own hippiness by being successful? What does it actually mean to be a hippy?
In any case, it seems the hippies of '67 are either dead and gone, or ripping-off tourists by selling over-priced incense and sweat-shop laboured garments from India. It seems hippiness is full of contradictions, but that's to be expected when the Summer of Love occurred in an area called Haight.

Meanwhile San Francisco has been taken over by bums. Everywhere you go there are moochers looking for spare change. Old wasters or young drug addicts on their way to becoming old wasters.
Some of them were completely fucked. Downtown San Francisco is Bumtown. The streets are littered with bodies at night. 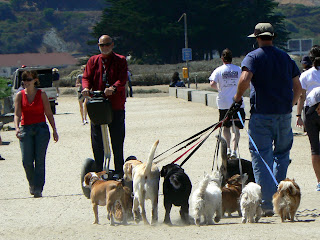 We saw one girl walking around like a zombie with her head down, obviously oblivious to anything going on around her. Only a matter of time before she wandered out in front of a car. We actually had to step around others as they were sprawled across the pavement, faces pressed against the concrete, dead or alive, who knows? Who cares?
The City of San Francisco doesn't, it seems. These living dead were just around the corner from City Hall. Apparently they turned off the fountains last year to prevent the bums from bathing in them. We also noticed a lack of benches, presumably so the bums have nowhere to sit. I'm not sure how that will help if they're using the pavements as beds but there you go. 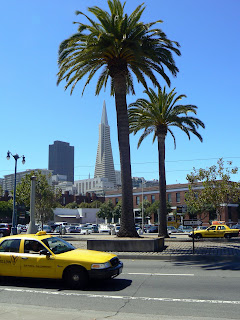 We'd been offered drugs so many times and had so many moochers approach us, that we were probably a bit wary of anyone talking to us. As we were going for a Bart in Oakland, a woman talking on a payphone suddenly called out while we were on the escalator up to the platform . Our immediate reaction was evidently cagey, sending her into convulsions. Hearty laughter only a black woman could laugh.
"You thought I was some crazy one, callin' y'all for money!" she laughed. "I just saw you lovely couple and wanted to wish y'all a wonderful holiday!"
I guess there aren't too many white visitors to Oakland, just across the bay from San Francisco.
"Hee hee hee!" she laughed again. "I outta bring you home and give y'all some of mah home cookin'!"
She probably was crazy after all.
Labels: San Francisco