Today was the first day of work. The orphanage, as you'd expect, is in a kip. We actually had to climb over mounds of gravel and jump across wide gaps in the dug-up road just to get there.
Gonzalo wasn't around, but we were met be a very smiley little kid with huge ears called Carlos. He grabbed both of us by the hand and led us to a building past a dusty playground/field. Other kids came towards us. All smiles. "¡Hola!" Questions, questions. Very curious these orphans are. We answered those we could understand. Smiled at the others.
In the room, Carlos proudly showed us what he had been making with Lego blocks. Machine guns. Various sizes and shapes, but all unmistakably machine guns. "Hmmm," said Jenny, not too impressed. (They didn't have real Lego obviously, but some sort of inferior brand especially for orphans.)
More kids came in, all smiles, delighted to meet to new entertainment. Miguel, Jesús, Juan, Juan Carlos and I can't remember any more. A stern old woman came in, tried to keep control, as the kids took turns excitedly asking questions in between punching each other, while one sulked in the corner on the floor. 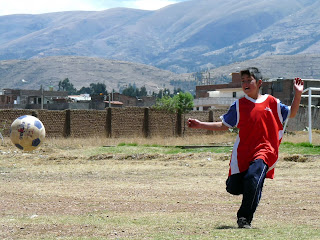 The woman told them Jenny was there to teach them English, "Inglés es fácil," replied one; while I was there to teach other children to be periodistas. The one who said English was easy could count up to 11, as could the rest, but for some reason they all then jumped to 23, followed by 29, before they gave up.
Some kid with snot on his face, who I later found out was Miguel, took a real shine to me, and kept hugging me and jumping on me to be hugged. Others, thankfully, were more reserved, but they were still very friendly and affectionate.
After running out of things to say, the woman suggested sport. "¡Fútbol! ¡Fútbol!" they cried, jumping up and down, and all hugging us at the same time. I guess we were playing football.
I was a bit worried about running around at 3,300 metres above sea level - I've been having problems with the altitude - but it was grand. We formed teams. None of them wanted to be on Jenny's team. "Las chicas en Alemania son mejor en fútbol que los hombres," I had to tell them, after which they changed their minds. 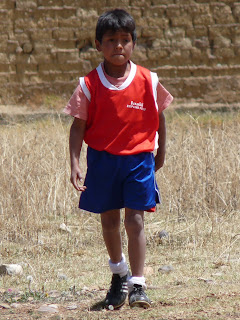 Jesús, the "nuevo Maradona" was on my team, as was Miguel, the snot-nosed kid who hugged me at every available opportunity. It was noticeably harder to breathe, but we managed to gulp enough oxygen into our lungs to survive. Jesús could actually be the new Maradona. He was delighted to hear it. (I also told him to run into spaces, so he'd have more time on the ball. Con mas tiempo hay mas posibilidades. He nodded seriously.) He was great though. The shit he could do with the ball!
I gave my first English lesson to Miguel. "Very good es muy bien," I told him.
"Vary gud," he repeated.
"Si. ¡Muy bien!" 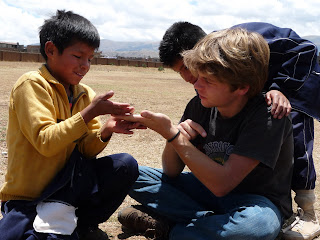 After fútbol, we made paper airplanes, I broke up a fight, stopped Miguel throwing stones at another kid, and gave piggyback rides around the yard, while trying to get the ball back off Jesús. Then I was tired.
None of them had been able to say my name. Ciarán must be practically impossible for them, so I became Kiwi as I was before in a previous life. By the end of the two hours I'd become Kiwicha. I take that as a good sign.