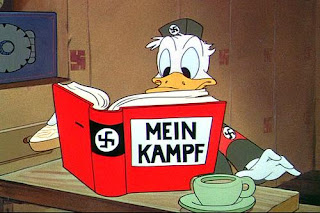 A couple of nights ago we went to see Donald Duck versus Hitler. "Now there's a fight worth seeing," I thought as I made my way to Kaffee Burger. The Feathered Fighter versus the Quack. I was curious to see how they would face off in the ring, but it turned out to be a misnomer. Instead it was a discussion evening on cartoons being used as propaganda during the second world war, Walt Disney's cartoons in particular.

It opened with the Oscar-winning "Der Feuhrer's Face" in which Donald is a Nazi in wartime Germany. I won't ruin the ending for you (you can see it below), but the lyrics alone are great. 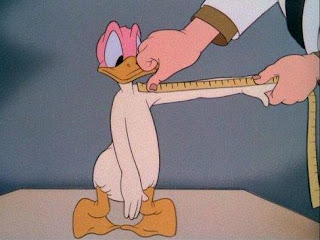 It's interesting that Donald Duck never wears trousers but he covers up his nether regions when stripped naked. I've heard he also wears a towel around his waist whenever he comes out of the shower. Maybe his bulging belly prevents him from noticing his own lad dangling freely as he walks down the street, or maybe it's an evolutionary hangover from when all ducks used to sit in water with their nether regions below the surface and out of sight.

Other wartime cartoons featuring Donald Duck ask the American people to pay their taxes on time, while Minnie Mouse and Pluto the Dog showed how kitchen grease should be saved for making shells and explosives for the war effort. Poor Pluto was upset to miss out on his leftovers at first, but was an enthusiastic supporter by the end when he is told his sacrifice will help fight tyranny and preserve liberty. Guns were featured a lot. Guns, guns, guns!

Wartime propaganda is one thing but today's general media, in which government and big business influence weighs heavily, is no angel either. You've been warned! A healthy dose of cynicism should be applied to everything you see, read and hear. Trust no one. No thing. Especially when it comes to journalists!