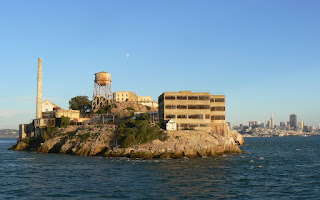 I said I'd write about Alcatraz, so I will. The facts are still fresh in my mind despite the passage of time. It was 18 nights ago to be precise. The boat was to leave at 6.45 p.m. and we were late. After kindly getting us onto the tour which had been booked out weeks before, Tegan had warned us not to be late. No matter. We were anyway.

I legged it down to the pier ahead of Jenny who was waiting on a pizza at North Beach, so called despite it being on a hill and nowhere near any beach. Crazy San Franciscans. The pizza was in uncooperative mood, taking its time as if daring the boat to leave without us.

Thankfully the boat was late too, and by the time I collected our tickets Jenny arrived at the dock with the pizza. We boarded, took our seats, and wolfed it down, putting on a show for the other passengers who looked at us curiously as we all bounced over the waves. We didn't care, we were starving, but the irony of looking like real Americans wasn't lost on us.

Soon "The Rock" loomed into view with its distinctive tower and a cloud of seagulls above and around it. "You picked a wonderful night to come to Alcatraz folks," the captain drawled. "We're in for a beautiful sunset this evening." I bet he says it every night. To all the tourists. But for a moment we felt special. 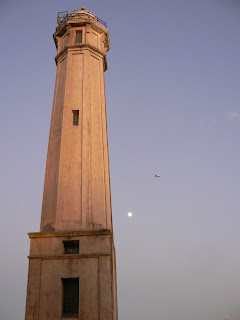 I was excited. I was particularly looking forward to meeting Al Capone and the rest of the lads - Alvin "Creepy Karpis" Karpowicz, George "Machine Gun" Kelly and, of course, the "Birdman of Alcatraz", Robert Stroud. It was Alphonse in particular though, that I wanted to see. Scarface would be the perfect candidate for advice on how to make a few bob in these times of depression.

"Did you ever hear of Al Capone?" I asked Jenny. (I've come to learn East Germans had different heroes to Irish kids when they were going up.) What she said startled me. She told me she had Al Capone jeans when she was growing up. Al Capone jeans! She got them in Turkey apparently, but they were very fashionable in the GDR. I was struck speechless. Dumb with shock. I had no idea Mr. Capone was into haberdashery. Hack-and-dashery perhaps, but definitely not haberdashery. Now I had another reason to speak with him.

Imagine my surprise when I found none of them were home. We were 46 years too late apparently. Forty-six years! No wonder Mr. Capone didn't reply to any of my emails. I thought he was just being cagey; a natural reaction to being incarcerated. But no, apparently the last prisoners left on March 21st, 1963. Capone himself left in 1938 before unhelpfully dying in 1947. I may have to look elsewhere for my advice. 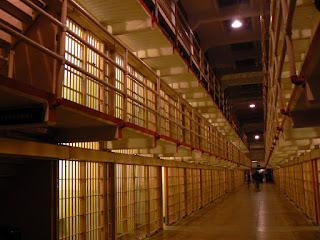 Despite the lack of prisoners, we were shown around the former prison facility by very friendly park rangers. Wherever park rangers are Yogi and Boo-Boo can't be too far away. Or so I thought. But no. They don't live on the island either I was told. "Does anyone live on this Godforsaken island?" I wondered.
Seagulls. Thousands of loud squawking and cawing seagulls who did their best to prevent the wardens from divulging any secrets of The Rock's shameful past. As if laughing hysterically at their futile attempts to share the burden of an overbearing past. 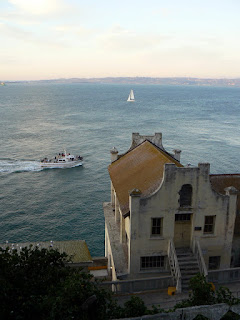 I would dearly have loved to meet Yogi Bear and Boo-Boo, possibly even more than I would have liked to meet Al Capone. Any animal who can get away with wearing just a collar must be worth meeting. Even Capone never dared try that.
Anyway, after determining there was no one worth meeting left at Alcatraz, I made do with the audio tour provided to visitors. With the voices of former wardens and prisoners in my head, complete with impressive sound effects, I imagined the horrors of life behind bars in one of the world's most notorious federal prisons.
Not too bad I thought actually. Compared to the shit the Stasi and their predecessors put people through at Hohenschönhausen, Alcatraz was a holiday camp. Security may have been tight, but the food was good and the livin' was easy, although visitors were kept to a minimum.

Some inmates did try escape however. The park rangers took great pleasure in telling us all about the failed attempts, laughing at the poor souls who must now be further tormented at the thoughts of being tourists' laughing stock. Although, I guess if they were in Alcatraz to begin with they were no angels. Maybe they stole a camera at the Pamplona bull-run. Maybe they deserve to be laughed at. 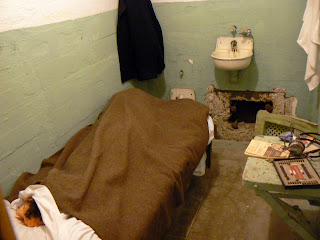 No one is laughing about the Anglin brothers who escaped with Frank Morris in the famous "Dummy Head Escape" of 1962. They dug their way through the walls of the cells, climbed out through ventilation shafts, and made their way off the island on rubber rafts. The dummy heads which they made with paper, soap and real hair fooled the wardens long enough to buy crucial time before the alarm was raised.
The rangers took great pains to tell us no one ever escaped Alcatraz, and the three escapees are presumed drowned in the icy waters of San Francisco Bay, but I don't believe them. No bodies were ever found. Proof enough for me. 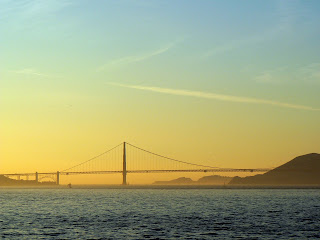 The captain wasn't lying about the sunset. It was glorious with the Golden Gate and San Francisco Bay before it. Afterwards the stars and moon came out to play, and the American flag fluttered seductively before the twinkling lights of San Francisco across the bay. Picture perfect. The way the American dream would have it.
Labels: San Francisco