The Comeraghs in Co. Waterford must be Ireland's most under-rated mountains. As beautiful if not more so than any others in the country. My uncle took us there despite his allegiance to Tipperary, and once he got over the initial shock of my hair. 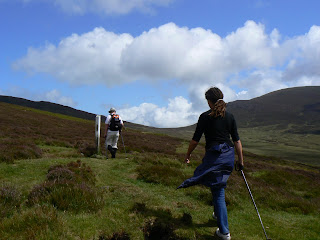 "Jaaaaysus!" he said as he opened the door the day before. It was a word we'd been hearing plenty of since we arrived in Ireland. In fact, I'd never noticed how often it was used before, but I guess with Jenny in tow, I was beginning to see things from another perspective. Everything prompted "Jaysus" as a reaction, whether at home with the parents, or camping with Noddy and Sully.
"What do you mean, you're not hungry? Jaysus!"
"Jaysus, that wind would strip a bullock!"
"Jaysus, those sausages are lovely!" 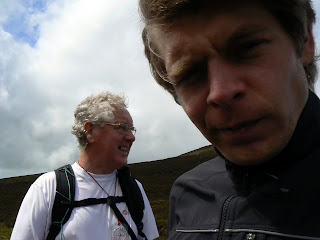 But back to the Comeraghs. They were dotted all over with sheep which were left free to roam wherever they wanted. White cotton balls on a pristine emerald mat. Only these weren't normal sheep, but punk sheep who seemed to be at odds with the beautiful unspoilt nature around them. They all had either bright luminous pink or garish blue painted on their hides. Highlights which would not have looked out of place in Berlin.
"Isn't it mad the colours they're putting on the sheep these days?" my aunt Eileen said.
All they were missing were the leather straps, metal studs, bad hygiene and attitudes. I guess the farmers want to be able to identify them from a distance. I wondered if the sheep liked being punks, or if it was a source of shame for them; if they sniggered at each other behind their backs, or wanted to hang out with the one with the "coolest" highlights. 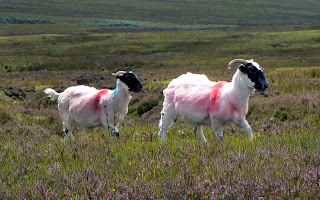 I tried taking pictures of them, but the fuckers wouldn't pose at all and instead ran off. 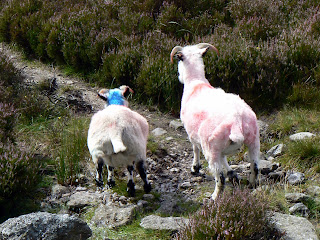 "Must be English sheep," I told my aunt.
"Probably Tipperary sheep," she replied. "The lousers!"
Labels: Ireland Sheep