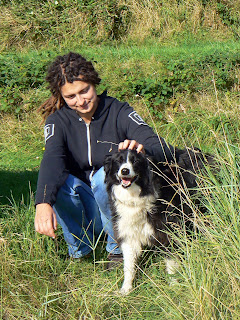 Noddy's last weekend in Ireland was a hectic one. As much for us as for him. 'Twas Saturday when we finally landed in Whitechurch.
Next up on the round tour of Ireland for Jenny to meet were my parents. "Jenny, my dad. Dad, this is Jenny," on arrival in the kitchen. Smiles and handshakes all round. A similar procedure for my mother when she came down the stairs.
The parents seemed to like her anyway, despite her vegetarian tendencies and dreadlocks. My dad seemed especially impressed when she took on the weeds in the garden, ripping them out with Gefühl und Kraft, and my mother evidently liked her enough to show her embarrassing pictures of my childhood as soon as my back was turned.

On Sunday we went camping with Noddy and Sully despite warnings of rain, rain and more rain. (The shitty Irish weather was a recurring theme in many a conversation over the two weeks, no matter who was talking and no matter the current conditions.)
Jiggsy knew a good camping place apparently so we drove out in convoy to Ballyhack even as the clouds were gathering overhead. After lugging tents, sleeping bags, beer and food through countless fields and over I don't know how many gates, he finally brought us into the woods on a hill overlooking the Three Sisters' flow into the sea. Not that we could see any of that - the feckin' trees blocked the view.

Jiggsy didn't hang around for long, heading off for some activities which are apparently so illegal he had to whisper what he was up to despite being in the middle of a forest with no one for miles around. Maybe he was worried the salmon would hear him.
My sister also declined to stay the night, leaving just the Three Amigos and a Berlinerin. "Good luck in fucking Australia," Niamh told poor ol' Noody as she was heading off, not making his prospects sound too enticing. She laughed at her Freudian slip, but it was too late - the tone was set for Noddy's last shindig before he set off for "Fucking Australia". 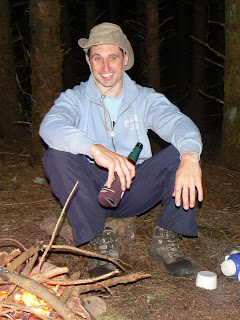 After getting the tents up and a good fire going we sat around and Sully took on the role of the seanchaí, regaling us with his stories. He was in mighty form. Everything was "savage" and a cause for wonder. He'd evidently been watching a lot of documentaries lately and he told us of the cuckoo chick kicking the other chicks out of the nest to be fed by their parents.
"He just sits there with his mouth open waiting to be fed," Sully explained. "Eventually he just takes over the whole nest while the parents go mad trying to feed him. It's savage!"
Niamh, who was still there at this stage, told him he'd make a great cuckoo, sitting with his mouth open waiting for food.
Sully was delighted with this idea, immediately throwing his head back, his wings/arms out to the side, imagining himself to be sitting in an ever-smaller nest. "Hawwwwwww," he gurgled. For a moment, it was as if he became a cuckoo. Savage. 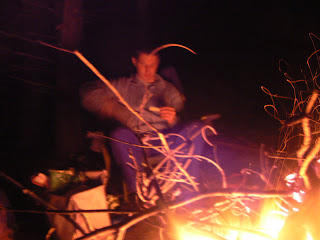 To be honest he's not that far off. A couple of nights before, he came home from the pub to his girlfriend's house, starving and tired and naturally drunk. Finding a loaf of bread in the cupboard, he was too tired to slice it. He proceeded to butter the top of the whole loaf and bite great chunks from it. Of course the mother came down to the kitchen to see what the racket was about, only to find her prospective son-in-law with half a buttered-loaf stuffed in his gob. Savage, as he'd say himself. 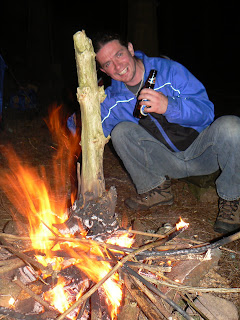 We ate pistachio nuts as we sat around the fire. "The best nut in the world," Sully proclaimed. I agreed. Noddy, however, did not. "They're fucking rotten. It's like chewin' sticks!" he argued, popping one into his mouth before making a face like a tortured monkey.
"You do know you've to take them out of the shell before you eat them?!" I asked him.
"Sticks!" he replied, popping another, shell and all, again making a tortured-monkey face.

We had no cooking utensils so we improvised. Corn on the cob was wrapped in tin foil and thrown into the fire. A long flat flagstone became a frying pan, and sausages and even steak were soon sizzling away on it. Of course the feckin' stone exploded, sending the lot into the fire, the sausages rolling into it one by one. We managed to fish them out again and no major harm was done. Despite the stone exploding twice more from the heat, we managed to get everything cooked enough to make it edible.
"Savage sausages," Sully declared.

The fire itself gradually became bigger and bigger as the night went on. "Stumpy" (pictured above with Noddy) was sacrificed early on. Jenny went gathering wood as if preparing for the long Berlin winter. Like a small Swedish logging company, she gathered enough dry wood to power a locomotive to Moscow. Hin und zurück.
Of course the stockpile wasn't piled or stocked at all, but flung directly onto the ever-increasing fire. Soon it went beyond the boundaries of the stones the lads had sensibly placed around it before lighting it; the fire outgrowing its nest.
"Like a cuckoo!" Sully observed, sending us into fits of laughter. "Savage."

I'm not sure at which point the fire actually became a bonfire, but it got to the stage where we were collecting dead trees and throwing them onto it. Noddy developed novel ways of breaking them into smaller pieces. 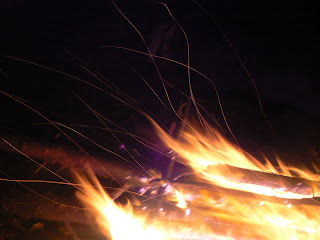 Firstly he grabbed one trunk in the middle, holding it horizontally and then running directly at two standing (still living) trees to snap it in the middle. I don't know how he didn't break himself in two. An almighty crash and wallop was followed by a heartfelt "Owwww".
Nod then used the two standing trees to act as a fulcrum, while he lodged a trunk between them and pushed with all his might until that snapped in two. 'Twas evidently hard work though, and so we just threw full unbroken trees onto the fire, while Noddy, for some reason known only to himself, took to climbing the trees that were still standing.
"Three more trees!" I told Jenny as we continued to gather fuel.

Meanwhile the raging flames sent showers of sparks flying towards Sully's tent. Sully, who was resting dangerously close to the fire, didn't seem to notice as the rest of us waited for his tent to burn down, but the sparks took their toll as he was to find out later on. 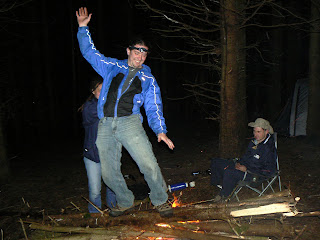 "How'd you sleep?" Jenny asked him the next morning.
"Great!" he replied. "Well, actually, I was a bit wet. Me head got drownded."
He brought her over to his tent to proudly show her the holes which had been burnt into its side. With perhaps even more pride, he showed me the wet pillow which he slept on.
"Me head was drownded!" he repeated, somehow delighted with his misfortune. "Savage," I replied.
The news quickly spread. Jiggsy rang Noddy to see if we'd survived. Apparently there had been a storm and very heavy rain which none of us had noticed.
"We were grand," Noddy told him. "Although Sully woke up with a big wet head on him!" 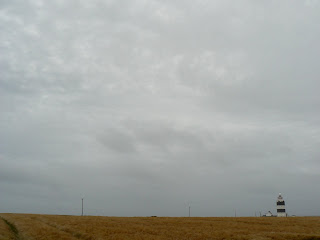 Monday night was Noddy's last in Ireland before he emigrated the next morning. After bringing Jenny to see the sights of south west Co. Wexford, we called to the house that night. Sully was already there, beer in hand, and we took off were we left off the night before, albeit without any trees.
Again, the conversation ranged from the bizarre to the ridiculous, with the lads talking of strange goings on in the village, from the gardaí in a high-speed chase which Sully observed when he was "scraping the walls at home", ("They itchy?" I asked), to a round up of who died where and when in which crash in the area. Jenny looked on in amazement. 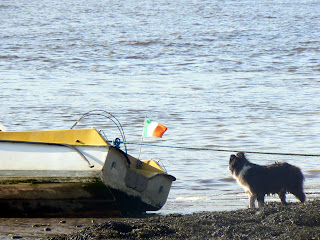 Maggie, Noddy's mother, came in at one stage and said it was like an American Wake, an old tradition in Ireland where an emigrant bids adieu to family and friends he usually never sees again. It was an Australian Wake in this case, and of course we'll see him again, but all the laughter, stories and banter couldn't disguise the melancholic air as we considered his move to "Fucking Australia."
It took a while to say goodbye to him that night, but no doubt we'll be meeting again soon enough. When exactly or where now will be anyone's guess.
Labels: Ireland Life Noddy Sully