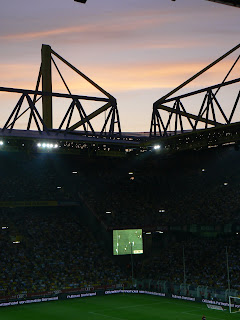 On Wednesday I was the guest of Borussia Dortmund to see them thrashed five nil by Real Madrid in a match arranged to celebrate the German club's 100th anniversary. Happy Birthday lads.
Despite it taking more time to get to Dortmund (9-hours by bus) than it would if I had flown to Madrid, I couldn't turn down the chance of seeing Raúl, Kaká, Benzema et al play in Germany. Particularly once Borussia granted me a press pass! (It's great being a journalist. I just have to figure how to make some money from it, and then I'll be set.)
I was especially looking forward to a big feed of Brötchens und Bier after being spoiled by Hertha Berlin at the Olympiastadion last May.
My ticket, despite being free, included the price of local transport to and from the game. What a country! Unfortunately it didn't cover the bus trip from Berlin. Now that would have been something.

On the way to Dortmund I noticed what wonderful names some of the towns in Germany have. Halberstadt made me ask myself where the other half of it was. Presumably that's called Anderehalberstadt. How careless can a city be?! They should join the two together again, à la Berlin, for what I'm sure would be a joyous reunion. They'd have to change the name then of course. Maybe Getrenntnochmalstadt.
Guterslöh is another fantastically-named place. From what I could see of it, there actually seemed feck all else to do there except get slowly goutered. "Ah the memories," said Dáire when I told him I was there. We drove past it on the way to Berlin from Ireland all those months ago.
There's no end to the fun you can have with German place names. It's a subject I'll have to return to at some stage in the future. 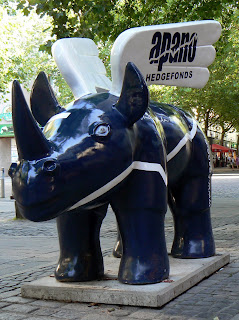 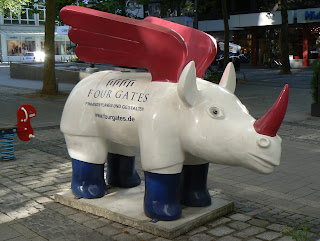 Dortmund itself seemed to have been taken over by flying rhinos. They were all over the city, just hanging around nonchalantly.
I suspect these may in fact have been horses in disguise. I had seen "Frische Pferdewurst" advertised for sale. Rather than sausages for fresh horses, I have a suspicion these were in fact sausages made from horses who weren't clever enough to disguise themselves as rhinos. Nobody would dare attempt to make sausages from a rhinoceros. The wings were an added precaution however, just in case.

Getting the U-Bahn up to the stadium, I had an open bottle of beer in hand when I was stopped by a Polizist. Calmly and almost apologetically, he explained that it was "verboten" to be drinking on the city's public transport. I could drink on the platform but not on the train. He suggested I could wait 10 minutes for the next train while I finished my beer, or bin it before boarding. He was so polite and nice, it was ridiculous. I told him I'd go outside and finish it there. He thanked me for my "Verstandniss". I almost hugged him. 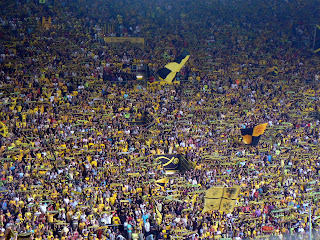 The fans were in jovial mood on the way in, one boldly predicting Dortmund would win 20-0. Inside the atmosphere was incredible. The Gelbewande Sudtribune was indeed a "yellow wall". All jumping, singing, clamouring in unison.
They whistled the Madrid team when they came out, much to my surprise, although they reserved a great cheer for former BVB player Metzelder. (He practically made love to them afterwards when he came out on his own to thank them for their reaction.) The fans kept cheering and singing even as their team was being slaughtered. Even as Madrid pinged the ball around, the stadium rocked with noise. 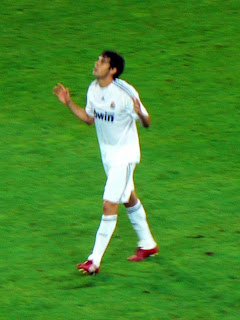 The unfortunately-named yet sublimely-talented Kaká was a joy to watch. His back-heel to set up the first goal set the tone for the rest of the game. He received tremendous applause when he was taken off. Ronaldo, meanwhile, was shite, and his every touch was booed by the Dortmunders.

I, however, was more concerned about the lack of brötchens and beer. There was none! No beer on tap, no belegte Brötchen, no sausage soup (horse meat or otherwise), no fresh fruit, nothing! Dortmund 0 Berlin 1, I thought to myself. Very disappointing.
At half time I went downstairs to join the commoners in the queue for beer. It was hot, and my tongue was hanging out for a drink. Jaysus! 15 minutes passed. I waited. I missed Robben's goal as the second half started. Still I waited. "Was machen ihr denn?!" asked fellow impatients, stamping their feet. Everyone gasping for liquid. We could hear the roars from the stadium and still we waited.
Eventually I gave up. Fuck it. I came hear to see the match. 12 minutes of the second half missed, and still I had no drink. Dortmund -1, Berlin 1, I thought. I'd probably still be waiting if I was there now. 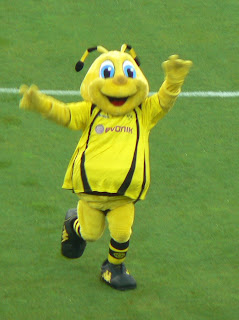 After the game, I wandered up behind the press box where I noticed a few other journalists going. A security guy eyed me suspiciously. "Kann ich ihre Karte sehen bitte?" he asked. I showed him the ticket and he opened the door with a smile. Tentatively I went through. Beer! I couldn't believe it. A whole bar with Madels behind it pulling pints to beat the band! Fancy tables and chairs, carpet on the floor and all!
I was barely able to talk I was so dehydrated. "Ich hatte gern ein Bier bitte," I gasped. Five seconds later all was forgiven as I was sipping an ice cold Pilsener. I was too late for the brötchens - hungry feckers got there before me - but it didn't matter anymore, the wait was over.
Labels: Fußball Real Madrid