U2 played the Olympiastadion last night, taking 90,000 Berliners under their wing, elevating them with their beats. Sounds over the top I'm sure, but everything about this band is - it was fucking great!

I admit I was sceptical the lads could do it. Their latest album left me disappointed. To be honest I thought it was shite. No Line On The Horizon? Wishful thinking I thought, as the lads refused to acknowledge the horizon of their achievements behind them. 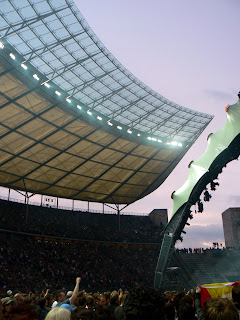 Gone are the days I would base a whole year's holidays around the tour schedule of my favourite band. The Vertigo tour (2005) took me to Gothenberg, Nice, and three times to Croke Park. Elevation (2001) brought me London (where only U2 could bring me), Slane in Ireland, and Berlin for the very first time (little did I know).
The previous tour, Popmart in 1997, also brought me to London, and twice to Lansdowne Road in Dublin. My cousin took me to my first concert when she brought me to U2's Zooropa shenanigans at the RDS in Dublin on on August 28th, 1993. Those were the days!
My maiden solo journey into Dublin came on my 15th birthday when I bought Achtung Baby, the album made in Berlin; while I was the first person in Gorey to get my hands on a copy of All That You Can't Leave Behind, after waiting in the shop for the clock to strike midnight. 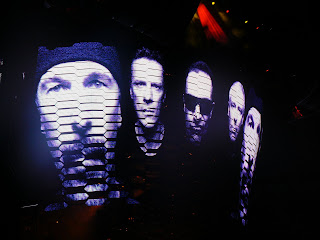 I was thrilled to actually meet U2 on my birthday in 2006, when I won a competition to have their book signed. Queuing with a bunch of other over-excited schoolgirls, I could hardly talk to the lads when we finally did meet up. I managed to blurt out how happy I was. Bono ascertained it was my birthday. "Ciarán goes to the dogs on his birthday," he wrote after hearing we were going to Shelbourne racetrack. God bless his leather trousers. The Edge complimented me on my t-shirt. (I was canny enough not to wear a U2 t-shirt like all the other schmucks.) They tried interview me for MTV afterwards, but I was too excited to speak. Sad but true. You can read what I wrote about for The Echo at the time here. 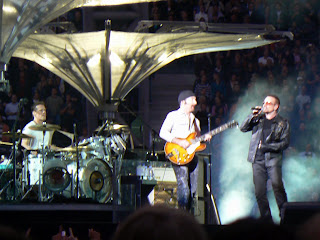 So you can see I've been a bit of a fan! Something changed in the meantime however. I didn't even buy the latest album, instead acquiring it through other methods before it came out. I didn't like it after I hearing it, and only bought tickets for one gig this time around.
Despite buying t-shirts at each of the previous gigs I'd been too, I didn't last night. €30 is a bit much for an unemployed bum after all. U2 clothe me no longer. I didn't even get a programme!

The atmosphere in the Olympiastadion was amazing, but still I knew yesterday I wasn't as excited as before. I looked around and noticed how old everyone looked. "It's like Jurassic Park around here," I told Jenny.
I had worn the same Radiohead t-shirt which The Edge had liked before in the hope he would spot me and wave hello. Alas, however, he did not. 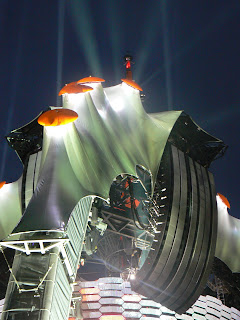 The first four songs were from the new album, and while better than I'd believed them to be before, still not great. Things really kicked off when they started the old stuff; the crowd roaring its approval. It just got better and better. The Unforgettable Fire, possibly U2's best song, condemned me to goose bumps. Incredible. After that they came at will. In fact, I'm getting goose bumps now just thinking of it.

At one stage I was just looking at the four lads on stage, thinking a beer would make my happiness complete. I think it was during With or Without You - an apt song for beer. Out of the darkness behind appeared a guy with a flashing light on his head, carrying a tray brimming with beers.
"Bier?" he asked.
"Bier!" I replied. What a country!

Towards the end, an Irish guy beside me got caught up in the whole emotion of the thing. He had obviously been looking around, surveying the magnificent Olympiastadion, pondering the past, when it suddenly became too much for him.
"Isn't it amazing to think Jesse James was here, sticking it up to Hitler during the Olympics?" he stated, tears in his eyes. "It's mad when you think of all that's gone on."
Berlin can do that to a man; the past can strike at any moment. I'm sure he meant Jesse Owens, but I wonder how Hitler would have fared in a shootout with the most famous outlaw of the American Wild West. 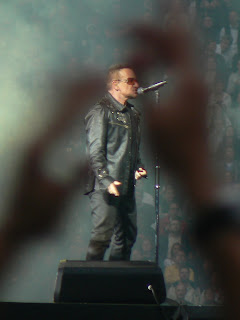 Bono is Bono of course, and he really does think the sun shines out of his arse. His boots just can't keep up with him. He charmed the pants off the crowd as only he can, threatening to go too far at times. "Ich bin ein..." But even he didn't dare go there - that would have just been too much.
He means well though, and his campaign for Aung San Suu Kyi is a noble one. Tomorrow will mark exactly 20 years since she was first put under house arrest. At the end we all sang Happy Birthday to Nelson Mandela. He probably heard us in South Africa.

Ultraviolet saw him (Bono not Nelson Mandela) emerge for the encore wearing a suit which fired off red lasers into the crowd. It was great! More goose bumps. "This was written in Berlin," he reminded the crowd, as he did before all the Achtung Baby songs. Yes, it was good to have them home. 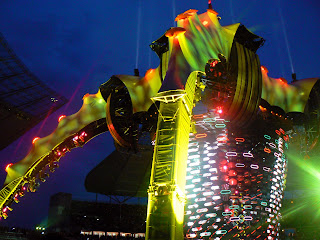 We'd cycled to the gig (another first, 25.3 km hin und zurück) but as were leaving we collected discarded beer glasses which carry a €1 deposit here in Germany. Jenny, whose eyesight is better than mine, collected the lion's share. With only a little bit of embarrassment, we scoured the ground and under people's feet for plastic gold. Outside the stadium we found still more. €40 we made altogether! Even more than the Radiohead concert last year when we first stumbled upon the scheme. What a country!

It was a damned good night. As it always is with U2. I should never have doubted them. I've given the album another listen this morning. It's great! I wanna see them again...
Labels: Berlin U2