Doomed enterprises divide lives forever into the then and the now. More words of wisdom from Cormac McCarthy, this time as a 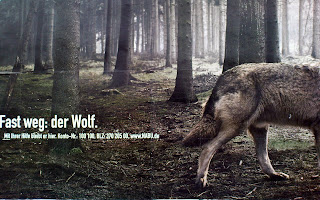 young man carries a dead wolf and her unborn pups to be buried in the mountains of Mexico.
(The Crossing - a feckin' great book.)
It made me consider last week my own various enterprises and whether they were doomed too, and whether my my life was to be divided as a result. Thinking about it further however, everything is divided into the then and the now, doomed or not. It's a simple matter of time. Perhaps the knowledge of the said enterprises' outcomes acts as a border between the two, but more often that not, the only way to determine an outcome is to cross that border.

Of course one enterprise I know now to have been doomed from the start was the latest legal venture. Ah well, you live and learn. Evidently Stefan didn't appreciate being called a leech however. (Blutsauger auf Deutsch apparently.) The truth hurts sometimes. Nice to know he reads the blog though, although I can't help feeling he should be spending less time reading blogs and calculating bills, the latest of which, incidentally, arrived today. 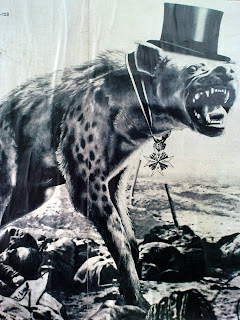 From bullshit to bull-running: San Fermin, the world's most famous annual encierro, kicks off in Pamplona on Monday. For a whole week the fiesta just never ends, with boisterous revellers parading the streets dancing behind marching brass bands at night, before the bulls are set loose on brave/foolhardy (delete as appropriate) runners the following morning at 8 a.m.
The celebrations are carefully choreographed so participants are as drunk as possible by the time the giant bulls (whose ample horns are as sharp as razors) are released surging down the narrow cobbled streets behind them. They all go charging down the streets in a blur of arms, legs and horns, pounding the ground, yelling and shouting, while onlookers scream and yell, jump up and down and gesticulate wildly. Whether at the bulls or the runners I don't know. It's madness!

Afterwards, onlookers make their way to the bullring to watch hordes of mostly-drunk people get chased around the ruedo by loose young bulls. 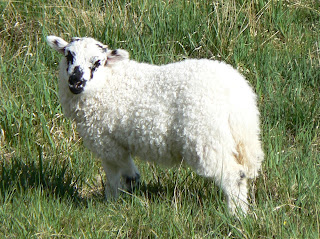 These aren't as dangerous as their-street charging brethren, but can still do quite a lot of damage when they manage to hook some poor unfortunate, toss him (or her) around a bit, and then attempt to gore them repeatedly while they lie prostate on the ground - much to the crowd's delight. Meanwhile the victim's fellow participants try frantically to divert the bull's attention before any real damage is done. Still, many participants are carried/dragged out of the ring, where emergency personnel wait expectantly.
As if the poor bulls weren't tormented enough; in 2006 I saw a guy in a Kerry shirt running out in front of them. I was tempted to gore him myself. Being from Kerry of course, the cute hoor didn't allow himself anywhere near the possibility of getting gored. By me or otherwise. 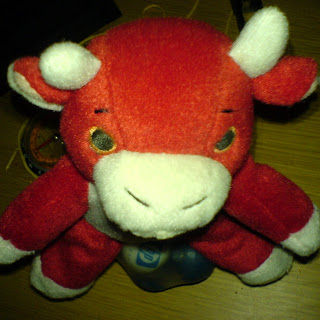 On Sunday I leave for Madrid, my original destination. I often wonder what might have been, but that was then, this is now.

For now it's just a short trip with the promise of greater adventures ahead. Still, sleeping under stars at night, running with bulls by day, greeting Galacticos in the evenings, catching up with friends and family in between - it's not a bad start!
No doubt the bus up to Pamplona will have healthier people on it than the one coming back...
Labels: book Bulls Cormac McCarthy Law Life Madrid Pamplona solicitor