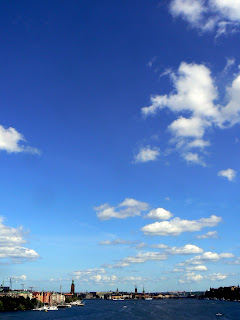 For such an advanced country, finding access to the internet in Sweden can be a right pain in the arse. This is the first opportunity in over a week I've had to update this ongoing collection of ramblings and ravings. Even here, in Stockholm, where we've been since Sunday night, there appears to be a genuine lack of places once can get access to a machine which will allow connection with the outside world.
However bad for internet access Stockholm is however, the countryside is even worse. Presumably the elk and reindeer have no particular need for such modern technologies. Sure why would they want to connect with the outside world?

For the last week we'd been in the ironically-named Värmland, near Råda to be precise, where we spent the time either enjoying the over-generous hospitality of Paul and Anna in their little cottage, camping in their garden, hiding from badgers; or canoeing in the rain through lake after lake, camping overnight on our own island in the middle of nowhere, hiding from the downpours being sent by the apparently angry Norse gods.

For some reason everytime I step in a canoe the heavens open up, and this time was no different, as it pissed on us for almost the duration of our six-hour rowing trip. I suppose I should have expected it, and at least brought a change of clothes. 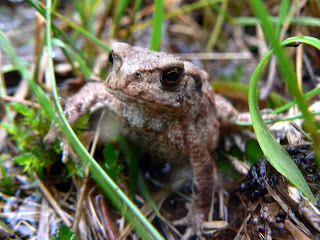 It's on these trips however, that one appreciates the little luxuries in life. I did bring spare socks, allowing me to discover the sheer luxury of putting on dry socks in the morning, followed by the sheer misery of putting them into wet shoes immediately afterwards.

If it wasn't rain it was mosquitos. Apparently the local ones like a bit of variety in their diet, and they were happy to have non-Swedish-victims for a change. 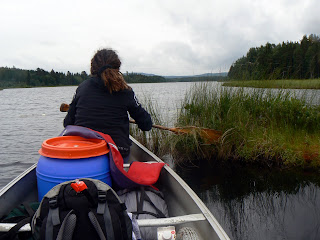 The little fuckers are incessant, biting even through clothes, and causing me to slap myself in the face on more than a few occasions.
And Jenny had wanted to go canoeing/camping for four days! Still, we made the most of our circumstances. It was nice to have a whole island to ourselves, even if we were too wet and exhausted to enjoy it. Breakfast was the highlight, sitting on a rock, wrapped in a sleeping bag while waiting for clothes to dry. The sun at this stage had seen our plight, and graciously attempted to assist us, rays dancing through the branches to assure us there was another world beside Wet. 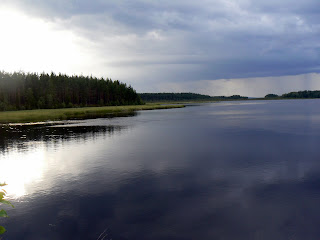 Again, we could have planned it better. Apart from dry clothes, we didn't bring matches or anything to light a fire, nor enough food, nor stuff to eat it with. We did bring muesli and yoghurt, but no bowl or spoon. Never mind, Jenny ripped off the top of the yoghurt carton, threw the muesli in, and managed to eat it with a type of spoon which I had fashioned from a twig. Mad what living in the wild just a few hours can do to people. 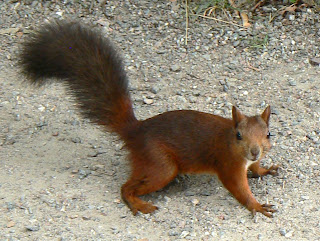 Then there was the trip back, which probably would have been quicker if we managed to canoe in a straight line. We zig-zagged the whole way home. It was only after we brought the canoe back that your man told us I should have been steering the damned thing,

Of course, when we got back to civilisation, I found we had brought the bowl and spoon after all. Stuffed down the back of the rucksack. It was probably the first instance I noticed where late wasn't better than never. 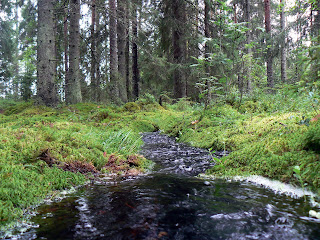 The Swedish countryside is great for walks though. You can just eat all around you, Wherever you go there are blueberries, wild strawberries and other delights just waiting to be plucked and gulped down. I felt like Homer in Chocolateland just eating everything in sight.
I did have high hopes of catching sight of an elk. Apparently they are quite shy though. Not one did I see. Perhaps like Wildschwein they don't exist at all, they're just a gimmick invented by the Swedish Tourist Board in the same way leprechauns were invented for gullible Americans.
Now that we're in Stockholm, it feels like another world away. Hot showers, food, dry clothes: such luxury. I guess we can forgive the lack of internet access.
Labels: Sweden