San Fermin! (Running of the bulls) 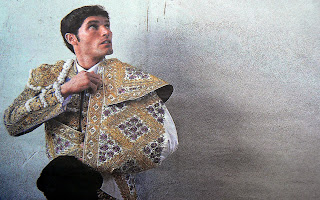 Pamplona is a scary place on arrival during San Fermines. The scenes of devastation could be surveyed from the bus on the way in. It took ages to actually get in because drunken idiots were just standing around, staring ahead, as if in a trance, stupefied with drink.
Hundreds of people milled around, all wearing the traditional festival garb: white trousers and t-shirt, with a long red belt and a red bandana tied around the neck. Where everyone was going I don´t know. I don´t think they knew themselves, wandering aimlessly like zombies. Others lay around like corpses, littering the bus station with their bodies, passed out from excess, sleeping where they fell.

The station itself looked like it had been hit by a bomb. Broken glass everywhere (worse than Berlin), and more litter, rubbish and shite everywhere else, I mean EVERYWHERE. It spilled out onto the streets, where the scene of destruction continued as far as the eye could see. 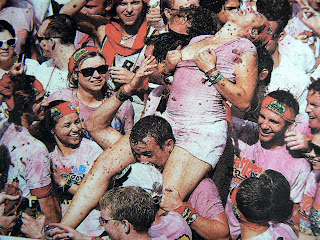 I had to wade through the shite to get through the town, crunching my way through a tide of plastic glasses, half eaten bocadillos, and Jaysus knows what else.
Walking was actually quite difficult on account of the stickiness, a cocktail of beer, wine, cider and Kalimotxo (a Basque drink made by mixing wine with coke). My feet just kept sticking to the ground, making a comforting shlurping sound every time I lifted a foot.
Drunken revellers still standing spilled around, all absolutely shit-faced drunk, their white costumes stained purple with wine and all the other shit they'd been drinking. I'd never seen so many drunks in one place before. Not even in Ireland. The Spanish seem to go cross-eyed when drunk. All of them. Every single one. The cross-eyed loud feckers.

Amorous couples wandered around too, staggering along, holding each other up for support. Love was definitely in the air. Everywhere I looked arses were being grabbed, bodies locked together in drunken love embraces. I wonder how many babies will be called "Fermin" in nine month's time. In fact, I might have observed one being created in the park.

Of course, everyone is really here for the bull-run! Love in the park and all-night partying are just convenient bonuses. At 7 a.m. brass bands marched through the littered streets, making an almighty racket as they sought to rouse those who had fallen victim to the excesses of the night before. Drums and trumpets their alarm call to get up for the first encierro of the San Fermin festival.

From 7.30 a.m. the site of the bull run was a sea of panic. Everyone crammed together, pushing, fighting and cursing to find non-existent vantage points. Others, desperate to run with the bulls, ran and pushed and tried to get into the course. Again, it was in vain - well-prepared runners had been here hours previously, jumping and warming up in anticipation of six giant wild toros charging behind them. Meanwhile, the tension and excitement kept building... Even if 95 per cent of the onlookers couldn't see a thing, 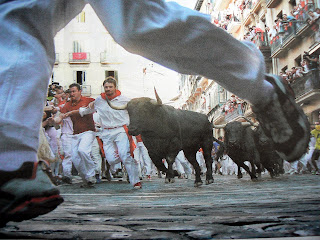 they could feel the drama about to unfold.

Then the run! An firework explosion marked the start at 8 a.m. sending onlookers into a state of frenzy. The bulls were out! Then another explosion. The last bull was out! Screams. Shouts. Yells. Aaaagh!!! "They're out! They're out! Run! Run!" As if they needed the advice.
A thundering of hooves went pounding past. Those who could see gave the soundtrack: "Ooooh... aaaahh.... oooooooaaaahhh!" Their grimaces told the story as some poor unfortunate was getting trampled or gored down below. 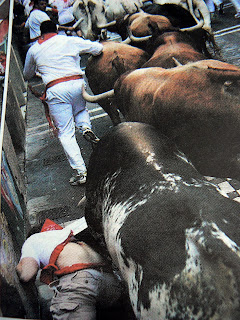 Two minutes later it was over - the bulls had charged off down the street towards the bullring. The runners relived their experience, excitedly telling their friends of their heroic exploits. Describing every step, every duck, every tumble. "And the bull just missed me by this much," said one holding his fingers a centimetre apart. "I swear, if he was any closer I was a dead man!"

Others weren't so lucky. It was time to tend to the injured. I saw two people seriously hurt, one girl holding her face as she was led away on a stretcher. She was loaded into an ambulance and whisked away for attention. All around, in fact, ambulance sirens could be heard as the maimed and injured were carried away from the mayhem.

Down in the bullring itself, those who didn't run with the bulls got another chance - young bulls chased participants around the ring for the amusement of the crowd, a particularly blood-thirsty lot who seemed to particularly enjoy the sight of a drunkard getting flattened by the enthusiastic bull. The poor drunk got a few stabs of the horns too, before his colleagues managed to distract the sadistic bullock.

Unfortunately, an English stag party were still standing after all the commotion. I had noticed them earlier, with their purpose-made white shirts, complete with bull's head and their names printed on the back, just causing offence with their existence. I comforted myself at the time with the thought they would almost certainly by gored, trampled on or worse, but alas, it wasn't to be.
Still, today's was just the first encierro. Bulls' justice will be served. 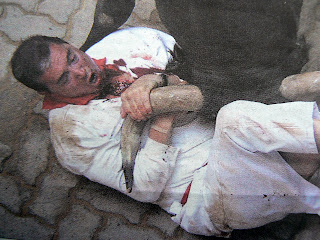 I must say the authorities are looking after me very well. I was too late for accreditation as a journalist, but they´ve given me use of their offices for the internet, free tea, coffee, biscuits, water etc. and one of the girls keeps checking on me to make sure I have no wants.
She just told me that an Irish guy was killed here last year. Not by a bull, or even a gang of bulls. He was "mui borracho" apparently, (very drunk), fell asleep on one of the old town´s ramparts, fell, and then plunged to his death below. Poor fucker.

(The pictures here are not taken by me. The pictures I did take unfortunately disappeared forever after some fucker stole my camera while I slept in the park that night. Instead I've taken pictures of pictures in the newspapers and added them here posthumously for your viewing pleasure. I dedicate them to the memory of my short-lived camera.)
Labels: Bulls Pamplona San Fermin