Poor Karim. Only 20,000 came to welcome him to Real Madrid on Thursday night, a bit of an anti-climax after the 90,000 for CR9 (as everyone's now calling him) three days before.
They had been expecting 35,000 for Benzema, as if 1,000 show up for every million you spend, but I guess it was a good welcome nonetheless.
Better than poor Raúl Albiol anyway, for whom only a miserly 9,000 bothered showing up despite his €15 million bill.
So far, Real have spent €213 million on four players. Ah sure, it's only money. What good is it unless you spend it? 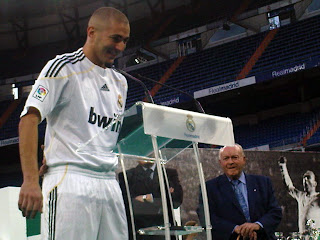 Karim, as I'm allowed call him, looked happy with the turn out anyway.
"On t'aime Benzema" wrote five pretty local girls on a French flag. Sure why wouldn't the 21-year-old be grinning from ear to ear?
He said he was a Real fan since he was 14. Sounds impressive until one realises that's just seven years ago! Jaysus, he wasn't even born when Hugo Sanchez used to perform his famous somersaults after every goal.

Radio Marca asked me for the Irish take on the shenanigans but my Spanish wasn't up to interview standard. So much for my lessons in México. "Mi español es muy malo," I told your wan. She evidently agreed. 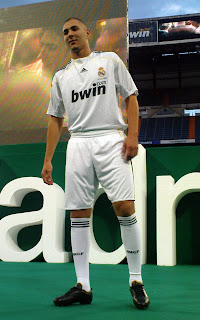 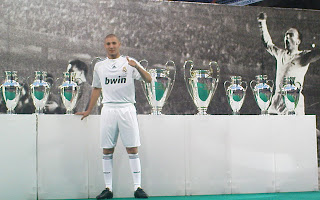 I thought Zidane might have shown up. It was exactly eight years since he was presented here himself, and I wanted to show him a few tricks. Apparently he didn't get my messages though.
Benzema, from the same stock, has a lot to do if he is to live up to the legacy of Zizou, the most galactic of them all.

Now being camera-less, I used my phone to take pictures of the ceremony. Jostling with the paparazzi to get into the best position in front of Karim, I can't have done much for the worldwide image of the Irish press. At one stage Florentino Perez looked directly at me, and you could see he was thinking: "¿Who's your man taking pictures with his phone?" Feck it. It was fun. 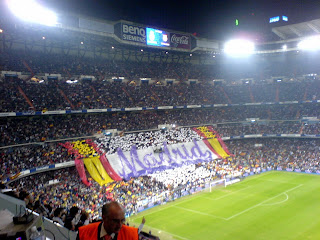 At least I made a better impression than when I was here for El Clásico (Real v Barcapigs) in 2006. At the time I had no camera at all and only a shitty phone, so I bought a cheap plastic disposable thing. After getting soaked in a torrential downpour, the cardboard started to peel away from it.
Who knows what Florentino would have thought had he seen me happily standing there among the television cameras of the world, clicking and rewinding with gusto, a trail of cardboard hanging from my laughable yellow camera. Again though, it was fun. 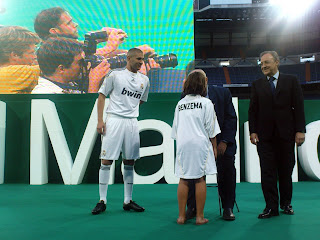 I can be spotted jostling with the paparazzi (who deserve the same contempt as solicitors and taxi drivers) at Benzema's ceremony here. You have to click past the advert and then I'm wearing the yellow t-shirt.
Labels: Fußball Madrid Real Madrid