Just saw while waiting for the Metro that a young man was killed during the bull-run today. San Fermin's first fatality since 1995. I thought it unlikely it was either my camera thief or one of the English stag party, so there was no feeling of bull's justice being done. Well, unless the bull, the innocently-named Capuchino, took any pleasure from it. 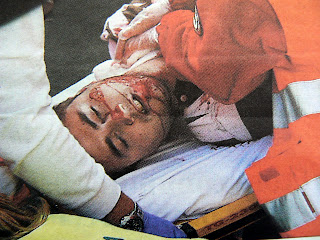 Apparently he caught the guy in the neck with one of his horns. Your man had jumped feet-first under the wooden barricades to escape him, and they're saying now he should have jumped head first, as any "experienced bull-runner" would know. Coulda, shoulda, woulda...

Capuchino wasn't satisfied with that, and went on the rampage afterwards, turning back just before the end of the run and charging left and right at more runners behind. Apparently 11 were injured altogether in today's run. But at least they survived, unlike the unfortunate 27-year-old Daniel Jimeno Romero from just outside Madrid.

The non-fainthearted can see the whole encierro here. It's fucking mad. Seriously, not for the fainthearted.
Labels: Bulls Pamplona San Fermin