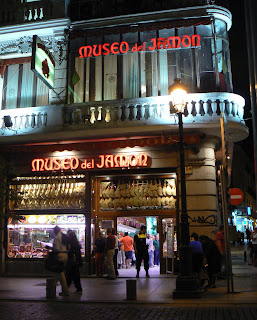 Madrid isn't a city for vegetarians. One particular establishment is Museo del Jamón, now a Madrid institution with a chain of "Ham Museums" all over the city. Countless numbers of pigs' legs hang from the ceiling in all of them, decorating the place with piggishness while the meat is cured in the dry air. Cañas (small beers) and copas de vino are flung over the counter at thirsty Madrileños at a ferocious pace, along with tapas of jamón, olives, tortilla etc.
The best thing about Madrid's tapas bars is that you simply throw your rubbish on the ground when finished. In fact, the dirtier the place the better, as it's easy to spot which places are popular with the locals. They do provide bins under the counters, but I feel it's doing the place a disservice to use them: better the fling the stuff with a flourish onto the floor.
Bocadillos (rolls) and raciones (rations) are served for those who want something more substantial. For €2.50 on Sunday I got a Bocadillo de Calamares, a squid roll, which tastes a hell of a lot better than it sounds. It was delicious! 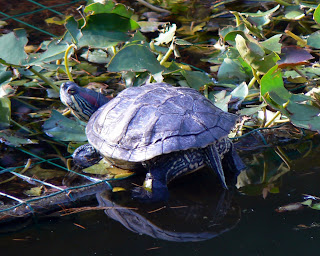 Another option is a Menú del Dia, a three course meal including wine and bread for about €10. These are served in all restaurants during the day (some at night) and are the sole reason my dad believes Madrid is one of the cheapest cities in Europe.
Eating like a king for a tenner is grand, but if you want to drink like a king, Madrid can be quite expensive. Poor Delphine got stuck paying for three mojitos at €9 each - a €27 round for those of you who aren't good at maths. That's about a month's salary in Berlin.
Better to find a quiet bench, buy €1 beers from smiley Asian walking off-licences, and watch the Madrid night go by. 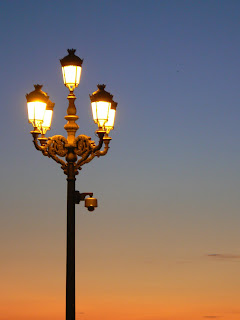 Chueca is Madrid's notorious gay district. Not notorious enough that Gavin knew about it before Delphine booked their hotel in the middle of it. A huge rainbow flag hung from the establishment next door, but to be honest there was no need for it - there was no mistaking the fact this was a gay district. Flamboyant characters wearing vests and arse-straps pranced and paraded about, pink fluff, studs, feathers everywhere. It was quite a show!
Despite Gav's reservations over Delphine's reservations for their "Gay Hotel", Chueca turned out to be the best place to find the €1 beers from the handy smiley unofficial off-licences.
On the day that Northern Ireland's Unionists traditionally antagonise Catholics with their annual marches, Gavin was telling us of their efforts to be less antagonistic with their antagonism.
"It's like gay pride for Orange bastards," he noted, perhaps inspired by his local surroundings. Little good it did in the end. 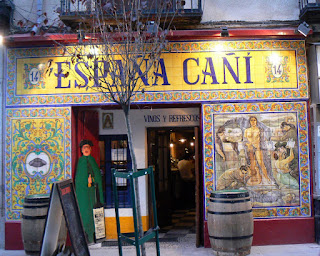 Madrid is known as the "City That Never Sleeps" (like Berlin, New York and no doubt a few others) but apparently its buses and trains do sleep between 2 and 6 a.m. Better to stay out all night, as most of the locals seem to do.
Night buses apparently do run, if you can find them, but on Monday morning I had to walk 7 km home. There was no way I was getting a taxi. No way! Vermin of the roads are all taxi drivers.
While I was at San Fermin in Pamplona, I thought it was great not to have a place to stay for the night. Like a snail carrying its house on its back, I thought I could make my home anywhere, just lay my head down where I fell to wake up refreshed and resuscitated in the morning. Of course, that didn't turn out too well...

But wherever there's bad shit there's usually good shit too, as I'm sure someone learned once said. Unfortunately the reverse applies too. Nowhere's perfect. Unlike in Berlin, where thieves are mostly only interested in bicycles, (with the odd notable exception), los ladrónes de España have an unhealthy interest in wallets, as Gav found out last week. 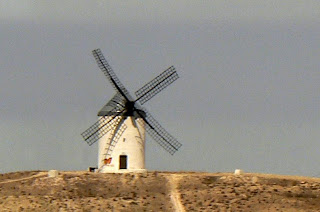 This is nothing new. A couple of years ago when I was here with Noddy, we also ran into would-be banditos (as well as being shot at by riot police, but that's another story).
Leaving a watering hole on our way to another, we were approached by two fellas who claimed to be "amigos". They tried show us a new danza which involved locking their legs in front of ours and jiggling them as we walked down the street. Suddenly Noddy stopped dead. "Take your fucking hand off me phone," he growled. The two lads stopped, looked at each other, and quickly withdrew, no doubt to find another couple of dancing buddies later on. 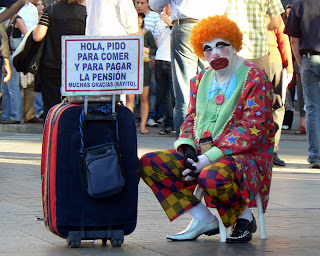 On Puerta Del Sol a group of women used target unsuspecting visitors by throwing their babies at them. The surprised tourist would instinctively grab the child, allowing the woman quickly rummage through their unprotected pockets, before the woman would quickly grab her baby back and disappear with her takings back into the crowds. God help the baby if the tourist was a bad catch.
My parents also had bad experiences here, as did my aunt, while a handbag was stolen on another occasion, so it's definitely a city in which the unsuspecting visitor would need to keep their eyes peeled, meaning of course, they wouldn't be unsuspecting anymore. 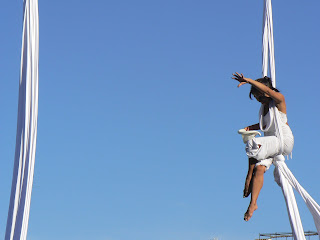 I noticed while in Madrid I seem to go to bed at a time I would normally be getting up at in Berlin. (Apart from today when I somehow managed to sleep until 4 p.m.) Germans are mad for getting up early and getting things done during the day. The Spanish on the other hand have the good sense to take siestas and long dinners during the day, perhaps why they can then stay out all night. I like to combine the best of both worlds wherever I am. I shall be taking a siesta shortly.
Labels: Madrid Noddy