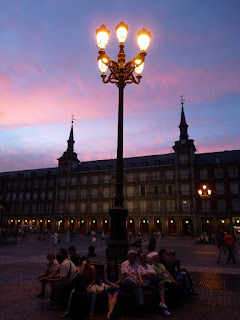 Madrid's a great city, no doubt. Pulsing with life and excitement, it's another on my long list of "home" towns, the one I nearly moved to last year (before I became enamoured with Berlín).
It's the essence of Madridismo which makes this city so great: the unapologetic passion for enjoyment to the max; the appreciation for beauty, style, good food and wine; the sense of optimism; the unabashed confidence; the locals' unshakable belief they're living in the best city in the world.

At its centre, on Puerta Del Sol, is Km 0, the marking point for Spain's national roads and the point from which all distances are measured. As Madrid is geographically and politically (whatever the feckin' Catalans say) the centre of Spain, and Spain that of the colonised world (at the time of the Spanish colonies), and the world the centre of the universe (at time of writing), then Puerta Del Sol - Madrileños would have you believe - is the very centre of the universe! Perhaps it's this unapologetic presumption which gives this city the air it has; that it's literally at the centre of everything.

I always smile as I land at Barajas airport; the air on arrival somehow comforting, warm, sweet, fragrant, rich, almost hinting of the possibilities, and it was the same last week.
On the Metro into the city, I noticed the locals use their hands to speak, even while speaking on the phone, gesturing crazily like mute translators. The futility of this exercise was highlighted by the fact the train was even louder than normal. You'd think if people are using sign language there wouldn't be much need for volume but not in Madrid... 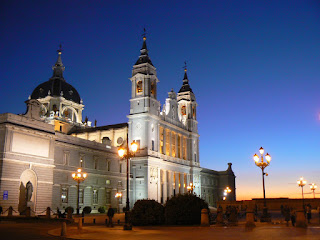 In fact, within the space of two days, I heard from two different people, totally unrelated, and one without knowledge of the other, that Madrid was second only to Japan for being the loudest city on Earth. Whatever about Japan not being a city, they both said exactly the same thing.
The first was Dave Mooney - the guy who apparently organised a job for me in a pub in Madrid when he heard I was moving over last year, but neglected to tell me of the job. In fact, he never even asked me if I wanted a job. Needless to say, as I didn't know of it, I never told him I wouldn't be able to take it. Maybe he still expects me to. I don't know - neither of us mentioned it last week either.
The very day after Dave told me about Madrid coming second to Japan on the loudness charts, my dad told me exactly the same thing. "Where'd you hear that?" I asked him, amazed, and wondering where I'd heard it before. He couldn't remember, and later (after I did), he assured me he didn't know Dave Mooney, nor did he meet him to arrange an elaborate hoax. They must have heard it from the same source. Bollocks, it must be an elaborate hoax.

It is loud though. Jesus, the noise! On my way into the centre on Friday night to meet Gavin and Delphine, the metro was stuffed with Madrileños on their way out - all excitedly yabbering and chatting like parrots on speed. What all the excitement was about is beyond me, but the noise was incredible! My ears actually hurt. I had to console them with a mojito later on. 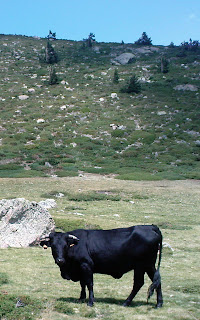 Even in the idyllic mountains to the north of Madrid, where I went for a day trip with my parents, the locals can't talk to each other without bellowing at each other. They must all be deaf. We had gone to Cotos, and the Natural Park of Peñalara, hiked up the side of a mountain to a remote lake, where the only sounds that could be heard where the chirping of some small brown birds, the odd distant cry of a hawk high overhead, and the gentle ringing of cows' bells. (While not loud per se, it hasn't escaped my attention that even Spanish cows need noise. They'd be lost without their bells. Irish cows, on the other hand, are happy to recite literature and ponder the meaning of grass.) 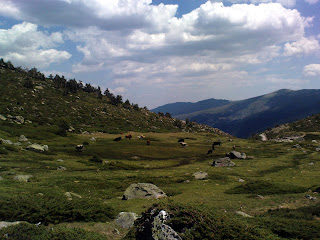 We were so remote there was still snow on the mountain peaks, not that high above us. In July! Meanwhile the sun warmed us gently through the clouds which teased us with their presence. It could only be described as idyllic.
Suddenly, out of nowhere, comes a fella walking along with two little girls, all roaring at each other at the same time. ROARING! Laughing, screaming, shouting, aaaaagghh!!!
"Will yis ever shut up?!" I felt like shouting at them, but then, of course, I would have been as bad as they were. We waited instead until they'd walked the 10 miles out of earshot. The Spanish wouldn't know quiet if it bit them on the arse. 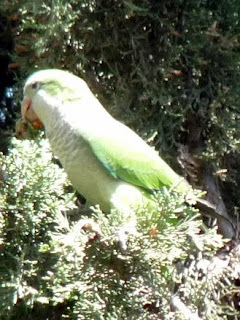 It's not just the people either. Apparently Madrid has seen an increase in the number of parrots in recent years. Little green fellas they are, (nothing to do with Darby O'Gill), cawing and squawking loudly like Madrid metro users.
"They've come here from Argentina," my dad explained. "Escaped pets I suppose."
He suggested their owners let them go because they couldn't put up with them anymore. Escaped parrots fell in love with other escaped parrots, raised second generation escaped parrots and are now taking over from the local bird population.
My dad isn't a fan, but I saw a kind of poetic justice: 500 years after the Conquistadores went to Latin America, the parrots are returning the favour.
Labels: airport Madrid