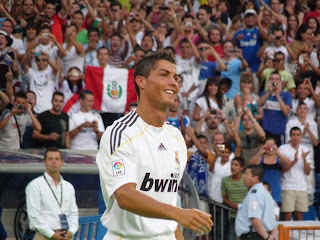 Ninety-thousand came to the circus. Only 80,000 got in, 10,000 stragglers left outside to imagine what wonders were being performed inside.
On Monday night, Real fans were presented with the world's most expensive footballer in a scarcely-believable ceremony of pomp, extravagance and fantasy. It would have befitted the return of the messiah.
Even Cristiano Ronaldo looked overawed by the whole thing, the €96 million man temporarily stunned at his reception as the latest Galáctico to have finally landed at the Estadio Santiago Bernabéu.
It was incredible! Such a show of excess. But that's Real Madrid. Nothing else would do.

The din was unbelievable as we waited expectantly for the arrival of Madrid's latest hero. Tension building, hearts beating faster, eyes popping wider. A mexican wave rippled around the stadium as the crowd roared down the blaring speakers. And still people poured in. Half an hour to go, they announced the stadium was full, prompting another roar from the delirious crowd. TVs showed more still pouring out of the metro and running to the stadium. Running! Mass hysteria all round. They were left to run around like disappointed headless chickens outside. 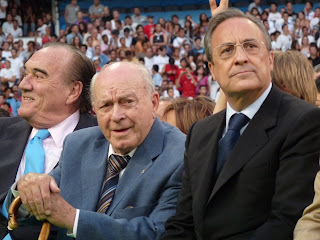 Inside, the former greats were lining up to share in the glory. The "mythical" Eusebio who was welcomed by club president Florentino Perez to see his countryman's big moment, and of course the legendary Di Stefano who was given a thunderous reception. The 83-year-old is still held in such esteem for his exploits in the 50s and 60s which helped establish the prestige of Real Madrid. An ear-splitting roar greeted his arrival. I confess goose bumps. Young Cristiano, who inherits Don Stefano's number 9, has some big shoes to fill. 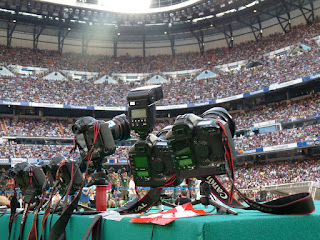 A child was picked from the crowd and invited on the presentation stage. Asked who his favourite player is, he refused to follow the script. "Kaká," he replied without hesitation, much to the delight of the fans.

A video of greats, past and present, was played with Pavarotti providing the soundtrack. Casillas, Zidane, Figo, Raúl, Roberto Carlos, Champions League triumphs, wonderful moments. The crowd worked into a frenzy, everyone going bananas. More goose bumps. It was madness! 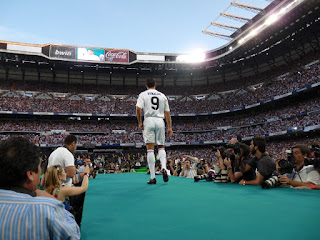 Perez, the man responsible for bringing the Galácticos to Madrid, thanked the crowd for helping to make dreams become reality. Perhaps a subtle hint to go buy a Ronaldo shirt. He needn't have bothered; 2,000 were snapped up from the club shop within the next two hours.

Suddenly I realised I was hungry. Unlike in Berlin, there were no Brötchens und Bier laid on for the press. I guess in Madrid they don't need to butter up the journalists. 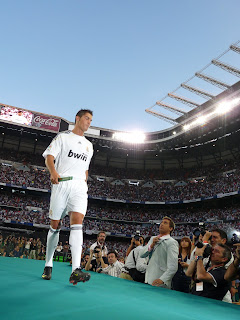 Hunger was forgotten when the man of the moment finally emerged from the bowels of the stadium. Aaaaagh! The crowd went wild. Pandemonium broke out among the delirious supporters. Photographers scrambled and fought to get the best shot. Ronaldo, meanwhile, stood and smiled, caught like an expensive rabbit under the bright lights of the Bernabéu and the world's press.

It could have been me, I thought. I shouldn't have concentrated so much on the studies. 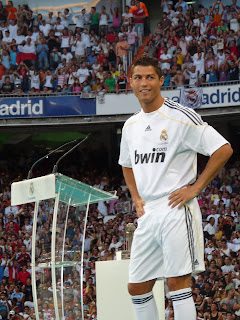 "It's been a dream of mine since I was a child to play for Real Madrid," Cristiano gushed, saying all the right things. He smiled, waved, put his thumbs up, and kicked a few footballs into the crowd, prompting more fighting.

Girls screamed, men roared, the paparazzi bayed: "Cristiano, Cristiano, aqui, aqui!"
He must have been hounded by them all day. While looking at the photographers with contempt, he somehow managed to smile for their cameras. He posed with the Real's record nine cups. One nine giving a thumbs up to the others.

A man in a suit gave him directions, pointing towards the still-not-satisfied photographers. Poor Ronaldo looked lost for a moment, and looked to Perez for support. He was left disappointed however: Puppet master Perez confirmed his €96 million star's duty to the cameras.

Chaos broke out at the end when sections of the crowd broke through a security presence ill-equiped to deal with the sheer numbers. Kids kicked up dust as they ran from police, and enamored girls screamed as they ran towards their hero. He was hurredly whisked away to safety. 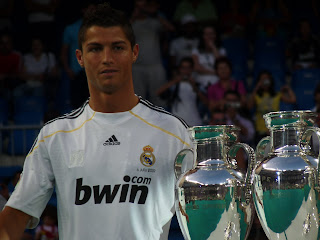 What an introduction! Welcome to the world's greatest pantomime Ronaldo. It promises to be quite a show.

Tonight it's the turn of young Karim Benzema. Next Galáctico report to follow shortly!