It was 40 degrees when I left Madrid yesterday. Things heated up the night before too. A night of cañas and tapas with Gav and Delphine ascended to one of tasty but expensive mojitos at the usual Cuban place near Puerta del Sol.
It was as we were leaving things got pretty heated. Gav went to return some of what he'd been drinking while Delphine and I waited outside, just a short distance from the door. When he came back out, he looked around for us, I waved, and he saw us. Then a guy from across the laneway approached him and they talked a bit. What about I don't know. I presumed your man was looking for a light or something. The mannerisms seemed friendly and cordial.
Suddenly I noticed the guy reach and take something from Gav's back pocket. I shot up the laneway and grabbed the fucker by the throat. "Give it back!" I roared as I pinned him against the window behind. "Give it fucking back!" Delphine ran up behind me. Gavin shocked beside me. Pandemonium broke out. I was aware of people behind me. I held the guy by the throat with one hand, tightening my grip. "Give him back his wallet!!" Whether he spoke English or not was immaterial; he knew exactly what I wanted. He gurgled and gasped for air. But no effort to hand anything back. I tightened my grip, banged his head against the window. "GIVE BACK THE FUCKING WALLET!!!" Jesus, I was furious! With my free hand I grabbed the cigarette from his mouth, went to stick it in his neck. Sparks flew everywhere. His opened his eyes wider, gasped, wheezed for air, gurgled, struggled. Still didn't hand anything back. I tightened still further, banged his head against the window again. "GIVE IT BACK!!!!" Thankfully Delphine reached behind him and grabbed the wallet from his hands.
"You got it?" I asked. She nodded. Gav confirmed he had everything. Meanwhile your man's buddies from across the lane were over. "Leave him alone! He's a bit simple. He doesn't know what he's doing." Simple my arse. He knew exactly what he was doing. They pulled him off. Not before I gave him a parting slap in the scuffle. I was so fucking angry. 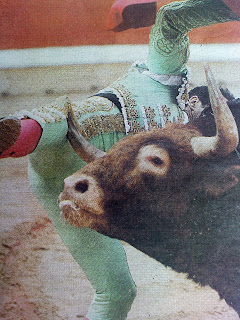 Nobody was happy. The thief was pissed off after getting choked, burnt and slapped. I don't know what happened him in the end. Nor do I care. Gav directed his anger at the security from the Cuban place. "You did fucking nothing! You just stood there and did nothing. He took my fucking wallet!" They didn't care. Just more stupid tourists. We weren't the first, won't be the last.

I surprised myself. I don't know if I would have actually killed your man. Immediately afterwards I thought I could have. I don't know if that's good or bad. Gav seemed to think it was good, and insisted on buying celebratory beers in La Fontana de Oro nearby. It pisses me off that one little incident can have such an effect, and this would have cast an unwelcome shadow on their time in Madrid, so I didn't really feel like celebrating.
It seems there are people everywhere just trying to shaft others, where directly or indirectly, rip them off, rob them, fuck them over; predators and victims, winners and losers.
Labels: Bandito Madrid theft