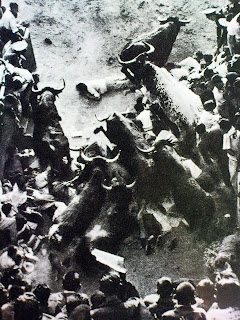 There'll be no pictures from Pamplona. Sleeping under the stars carries its risks, and one of them was having my camera stolen. I woke up 30 minutes before the start of the second encierro to find it had left me without saying goodbye. The fuckers took it from my backpack which I had been using as a pillow.
It's a sickener. Whatever about the cost of the camera, the pictures are irreplaceable, and I had taken plenty over the previous 24 hours: the scenes of carnage on arrival in Pamplona, the first bull-run of the festival, the bands, celebrations and shenanigans of the day, and the people and new friends I made last night.
It was about 4 a.m when I couldn't keep my eyes open anymore. Apart from a couple of hours on night buses and an afternoon siesta, I'd been awake since Monday morning, and I just couldn't fight off the tiredness anymore. I probably slept where I fell, as if in a coma, and the banditos must have sensed my weakness and struck then.
They also took my washbag for some reason. Evidently hygienic fuckers. 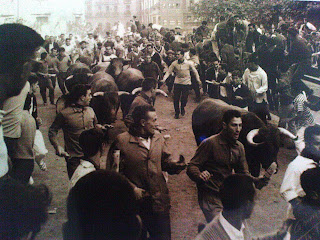 Earlier, my new glasses, the ones I collected last Friday and had worn once, were stolen too. That was my own stupid fault though. They were in the outer pocket of my rucksack, just waiting to be plucked out. Again, maybe if I had been wearing the damn things, I would still have them now. These lasted even less time that the ones I lost in México. I don't think I'll be buying anymore.
There are six more bull-runs to go. I'm back in the safety of Madríd now, but I'll be hoping the bulls exact revenge over the next few mornings. Go toro go! 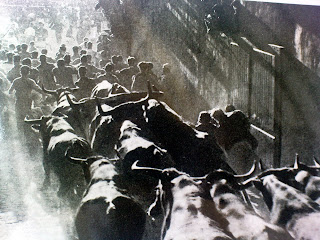 (Naturally these pictures were not taken by me. The ones on the right are actually from July 12th, 1936, the last encierro before the outbreak of the Spanish Civil War. The other is from yonks back too.)
Labels: Bandito Bulls Pamplona theft