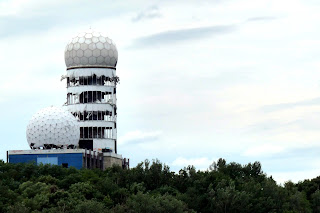 A Cold War relic lies abandoned on top of a mountain made of rubble, built over a Nazi college that couldn't be destroyed after the end of World War II. The gates of the former US spy station are locked and secure; its perimeter sealed by an uncompromising high fence, an angry crisscross mesh of wires that clearly imply: “Eintritt Verboten!”

Welcome to Teufelsberg, literally “Devil's Mountain,” a hill reaching 114.7 meters above sea-level, made from an estimated 12 million cubic meters of war rubble (apparently about 400,000 bombed houses) pushed together in the north of the Grunewald forest in West Berlin. 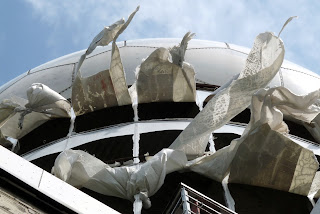 Buried deep beneath is what's left of a planned Nazi-military training school designed by chief Nazi architect Albert Speer. So sturdy was it that attempts by the Allies to destroy it failed, so they covered it with rubble instead. There was plenty of it around at the time. Every day, 80 truckloads of 7,000 cubic meters of rubble collected mostly by local women used to arrive. They became known as Trümmerfrauen or “rubble women” for their efforts. 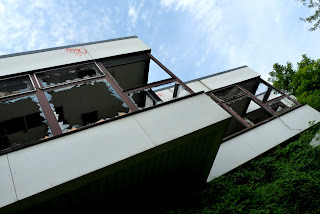 Perched atop this (wo)man-made mound now sits the old abandoned listening or intelligence-gathering station used during the Cold War by the Americans and British to learn what was going on in Russian-controlled East Germany. It wasn't very discreet; three huge bulbous globes, two “radomes” perched atop buildings three-stories high and another sitting a further six-stories higher, creating a giant condom-shaped tower.

I mean, the Ruskis must have known this stuff was here, especially as it was built on Berlin's highest “mountain.” Maybe the Amis wanted to taunt their foes with their phallic handiwork. Evidently it was a source of great pride. 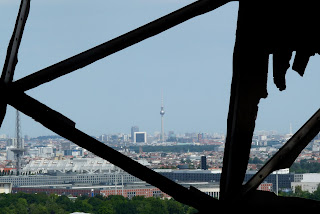 Due to its unique fucked-up history – a starring role in two World Wars and its subsequent division between the world's superpowers – Berlin found itself at the center of the so-called Cold War. This had nothing to do with nuclear snowballs, but was a pseudo war that flattered to deceive and ultimately never came to fruition despite the considerable expense accrued by its protagonists. Another considerable waste of money and illustration of human folly. 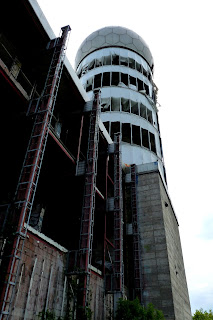 Spying and surveillance were the order of the day in divided Berlin. American mobile listening units, eavesdropping on Soviet and East German communications in the late 1950s, discovered they got better reception and coverage from the top of the 115 meter-high Teufelsberg. Quelle surprise!

The first mobile units took up position atop the hill in July 1961, with more permanent facilities following in 1963 before Field Station Berlin Teufelsberg gradually grew over the following years to become one of the West's largest spying stations ever.

As the mountain was in fact located in the British sector of Berlin, the Brits and Americans cooperated on their spying programs. (Presumably this means the Brits did whatever the U.S. National Security Agency told them to.) 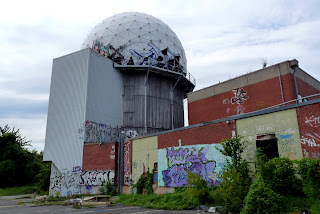 USM 620 Kilo, as it was also known, was part of the worldwide Echelon spy network. Each radome globe contained massive 12-metre satellite dishes and the most sophisticated spying equipment for the time, enabling the western powers to intercept satellite signals, radio waves, microwave links and other transmissions, before interpreting and analyzing their findings. It’s clear that they didn't really trust the Ruskis that much. The feeling was mutual.

Contrary to common belief, however, there was no radar equipment ever installed at the facility.* There was no need for it. Radar is used to detect objects (such as airplanes, missiles, terrain) and the Allies already had radar facilities at Tegel, Templehof and Gatow airports. Teufelsberg’s function was to listen – nothing more. 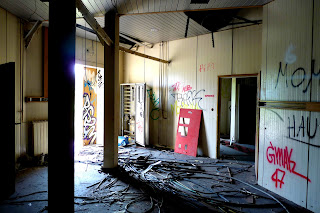 Field Station Teufelsberg lost its raison d'être after the fall of the Berlin Wall and end of the Cold War, and was eventually abandoned in 1992 to the Wildschwein that allegedly call Grunewald home. The Americans used to call them “Grunie Pigs.” I didn't meet any of course, proving again beyond a shadow of a doubt that they don't exist.

In 1996, the 4.7-hectare site was sold to developers for 5.2 million Deutschmark, and they started with their plans to build “exclusive” apartments (must have taken their cue from Irish developers), a hotel and restaurant, as well as a spy-museum. Spiraling costs put paid to all that however, and the project was abandoned mid-construction after reaching debts of €50 million. 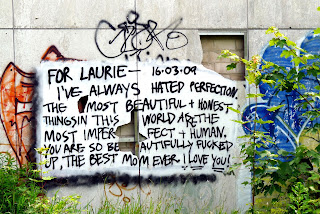 In February 2008, filmmaker David Lynch tried buy the place along with some crazy foundation of meditationists and yoga-bashers who wanted to build a “Happiness College” featuring a 12-storey 50-meter high “Tower of Invincibility” to house 1,000 students. The city turned down the proposals for some reason. 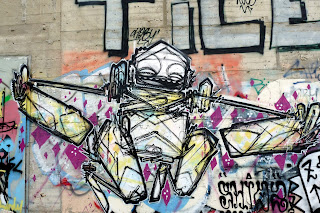 Another group of hopeless romantics, nostalgic for the good old Cold War days, want to preserve the remains of Field Station Teufelsberg as a memorial. They bemoan the damage caused to their beloved spy station by vandals and other unwanted visitors. The “Save Teufelsberg” campaign is now in full swing.

No new buildings can be erected on the site after it was declared part of the surrounding forested area in 2004, though the developers still retain hope of constructing apartments in the existing buildings. Negotiations are ongoing. 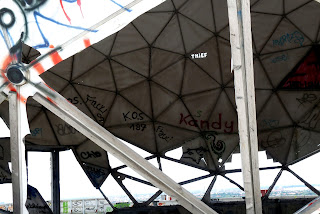 There was a time curiosity appeasers could enter through the broken fence and go in for a wander, but opportunists have taken advantage of the ongoing uncertainty by leasing the land and charging visitors admission. So ist Berlin. The group claims to be protecting the vandalized buildings from vandals. Sometimes they offer tours too. The fence has been repaired and thuggish security guards demand money from those who jump over it. 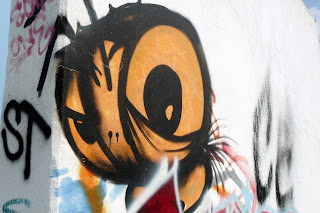 The situation is likely to continue until the developers and city agree on Teufelsberg’s ultimate fate. Of course, it would be great to see it restored/preserved, but that all costs money the city doesn’t have and developers don’t give away without something in return.

Meanwhile, I’ve had to update the visiting guide below to reflect the current situation. You can either take your chances with security or simply cough up the money they demand. Fittingly perhaps, it’s a devil’s choice. 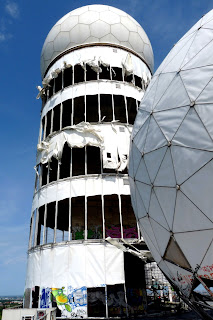 How to get there
Get the S-Bahn, S9 or S75 to Heerstraße, or S1 to Grunewald and walk/cycle from there. Map can be accessed here. 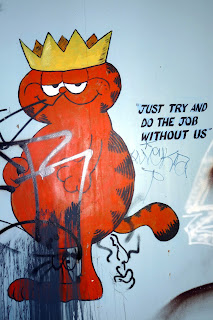 From the carpark simply walk the paved “Dragonfly street” path until you come to the fence. It’s much better fortified since someone noticed there was money to be made. If you follow it around you’ll come to the main gate. It’s the easiest entrance point but from there you’ll likely have to contend with security.

When to go
Daytime is better for observation purposes. Teufelsberg also provides good vistas of the city of Berlin. Nighttime could be good for parties, though care should be taken not to fall drunkenly from the unsecured tower. Fall soberly if you have to.

Difficulty rating
8/10 if you plan on avoiding security, 1/10 if you accede to paying them. 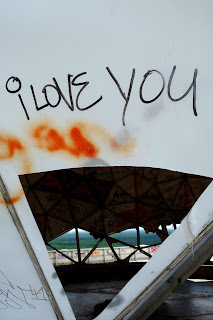 Who to bring
Friends for a party and exploration. Girlfriend/boyfriend for a romantic vista over Berlin.

What to bring
Camera. Beer. A torch. Maybe a few sandwiches. All that exploring can be hungry work!

Dangers
Not all ladders in the towers are secured to the concrete. Be careful! Luckily I was able to climb back down the one I ascended, or I'd still be there now.
Wind. It can get very breezy on Berlin's highest point. Most of the surviving buildings don't have walls so be careful you don't get blown off.

Again, spread the word, and suggestions for other abandoned and dangerous sites to be explored would be most welcome!

*I had this confirmed by Reinhard von Bronewski, whose excellent Berlin-Brigade site is a treasure trove for anyone interested in U.S. operations and sites during the Cold War in Berlin. Mr. von Bronewski said he'd spoken with many former Teufelsberg military police and troops, including high-ranking officers, and they all said the same thing: “This was no radar hill.” 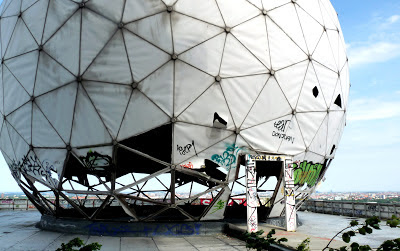 This post has been updated from the one that first appeared on June 26, 2009, to take the latest developments into account, add some historical details, more photos, and make some other general improvements. All photos were taken on June 23, 2009.
Labels: abandoned buildings art Berlin Getting in Spy station Teufelsberg