Spreepark! (And how to get in)

The spirits of dead clowns had been mocking me long enough. Since April they had been goading me, taunting me, deriding me for not venturing in. So yesterday I finally confronted them, stared down my fears and faced down the evil clowns.
Getting over the fence was easier than I thought. Almost as if they had been expecting me. They wanted me to come in. I hit the ground and stopped. All was eerily quiet as I surveyed the area around me. I looked around again. Nothing. Just trees and shrubs. Cautiously, heart beating like a drum, I proceeded up the bank towards the overgrown path, slipping in the soft ground beneath me.
What's that?! A snicker? A suppressed laugh from a tree perhaps. Or one of the clowns. I looked back again but nothing was there. All quiet. "Calm down!" I told myself. "There's no one here, nothing here. You have the whole park to yourself!" 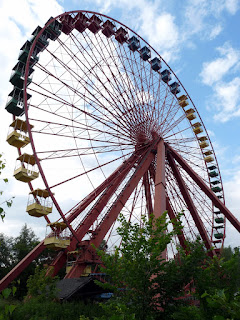 I'd finally made it into Spreepark, an old GDR-era amusement park flanked by the River Spree, abandoned to the elements at the edge of Treptower Park in Berlin.
East Germany's only permanent funpark after opening as the 29.5 hectare Kulturpark Plänterwald in 1969, it was hugely popular, not least because of its 45 metre Riesenrad (ferris wheel).

Spreepark was host to some 1.7 million visitors a year at its peak. Since the wall fell in 1989 however, its decline began. Only 400,000 visitors graced the park with their presence in 2001 before it was finally closed, escalating prices, stupid decisions and dodgy dealings contributing to its demise. Debts of €11 million were reported. 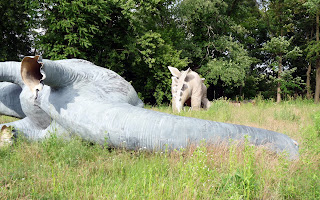 One of the head honchos responsible for the thing, Norbert Witte, legged it to Peru in 2002, along with his family and six of the park's attractions which, the authorities naïvely believed, were to be repaired there. The fools. Witte tried to open a funpark in Lima but failed, and in 2004 was jailed for seven years for attempting to smuggle €21 million worth of cocaine in the masts of the "Flying Carpet" ride back to Germany. There must be Irish blood in that family. Witte's son was also jailed for drug smuggling (20 years) in 2006.

Spreepark is now just left to rot among the trees and foliage of Plänterwald, its roller-coasters rusty and neglected, buildings boarded up, and fun-rides left for just the birds and rats to enjoy. It's fenced off from unwanted guests and big angry signs proclaim "Betreten verboten!" every 100 metres or so. 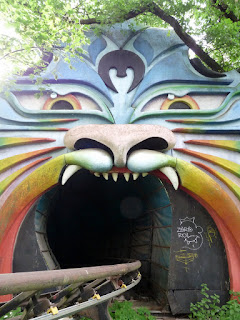 Of course, that just makes it more fun to go in! Spraoí, coincidently pronounced Spree, means fun in Irish, and it was even better than I imagined it could be - probably even more fun now than it was when it was open.
I quickly found the water-slides with their boats now covered in leaves and shit. A bit further on I found the first roller-coaster with its cars still lined up ready to go, eager to plunge into the gaping jaws of a fearsome-looking cat/tiger. The ferris wheel still looms over the park, its 36 cabins begging for someone to climb in. (Unfortunately the bridge to it is broken, so there's no way to get over unless one wades through the stagnant foul-smelling water surrounding it. I declined to do so.) Beside the ferris wheel is an old abandoned viking ship, and near that one can find the remains of dinosaurs which used to freely roam the park. Other buildings scattered around the park also invite investigation. 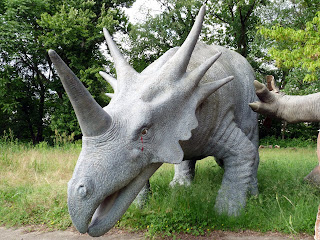 Exploration is not possible without a thumping heartbeat and adrenalin surging throughout your body however. Weird noises broke the eerie silence. Strange wildlife apparently now call Spreepark home, and they did their best to frighten the bejaysus out of me while I was there. Rustling in the grass, shuffling in the trees etc. I heard voices from time to time, sending my heart up into my mouth. Luckily they were just passers-by walking on the path outside.
Then a black Mercedes cruised along by the side of the fence and stopped suddenly. I froze and waited, before pushing on deeper into the park. I'd no idea who that was, and I'd no desire to find out. 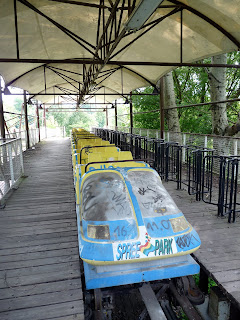 There are rumours of a 24-hour watchman who guards Spreepark but I didn't encounter him. I suspect if he exists at all that he's based at the northern end of the park, where I saw a van and signs of recent activity. I did find fresh tyre tracks in the soil, so there was definitely someone else there in a vehicle shortly before me. Trespassing is not looked upon with kind eyes in Germany so it's better to be careful.

Spreepark is a wonderful playground though, and one which shouldn't be boarded up and sealed off from the public, so I've compiled the following little guide for people who would also like to experience the joys and thrills of an old abandoned East German fairground. Of course, I could never encourage anyone to trespass or do anything illegal. This guide is for information purposes only! 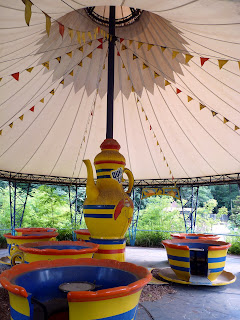 What
Spreewald Berlin.
Where
Kiehnwerderallee 1-3, 12437, Berlin.
How to get there
Get the S-Bahn to Plänterwald or Treptower Park and walk from there. Map can be accessed here.
Getting in
The fence is in bad repair in places. Simply walk along until you find a low spot, or slide under one of the few gaps underneath. It may be easier to find an entry point during the day than at night!
When to go
Daytime is definitely easier to get in and explore. There are more people about in surrounding park however. Nighttime is definitely spookier! 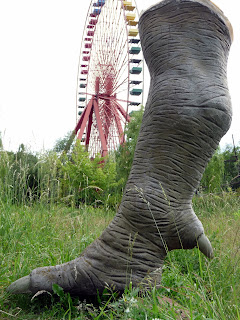 Difficulty rating
3/10 Not too difficult. Patience needed to find a spot to hop over fence.
Who to bring
Friends. Do NOT go alone!
What to bring
Camera. Beer. A bottle of tequila is also good, preferably with oranges and cinnamon. Can be drunk either beforehand for courage, while sitting beside the River Spree, or while straddling one of the fallen dinosaurs.
Dangers
Rumours of a security man may be well-founded. Care must be taken. Also watch out for nosy passers-by who may feel its their duty to report trespassers. Petty fuckers. Oh, and watch out for the dead clowns. 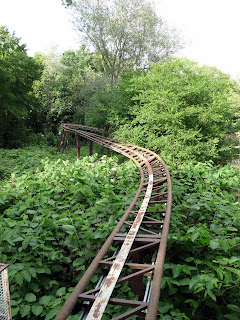 Hopefully this can be of use to some people. Please share with the world, and leave a brief comment if you found the information of use, or if you want to share your experiences. Any suggestions are also welcome, or indeed, if you know of other abandoned buildings or sites around Berlin which demand exploration!
Viel Spaß!