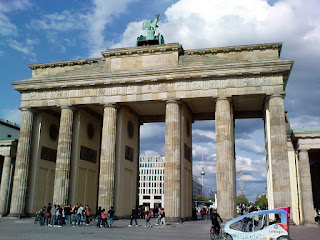 We forgot all about that after we topped Group 8. We topped it! A draw and three straight wins, the highlight a victory over the CDU. There was no way we could been beaten by a fucking political party. We hounded them for the ball. They were bigger, stronger, faster and more skillful than us, but we kept on their heels, snapping, snapping, snapping. No surrender! One guy went past me with the ball. I kicked him and fouled him as much as I could to hinder him, eventually throwing myself at him in a bear-hug/rugby tackle to stop him. It worked. He didn't get past. To be honest I should have been given at least a yellow card, but it didn't matter; these fuckers knew we weren't going down without a fight! They were rattled. They saw the contempt in our eyes. That contempt turned to joy when we scored. And then another! Woohoo!
We also beat a team of midgets, a team of hippies/punks/wasters (I'm not sure which) and drew with a team of South Americans. Nine goals scored altogether. None conceded! Along the way I found out beer between games doesn't help at all. But we were top of the group and ready for the second round!

The next lads were a different proposition. A team of Turks who knew how to play football. They patiently passed the ball around among themselves. We ran and ran, but couldn't get anywhere near it. Frederico kept us in the game with a couple of stunning saves. Then heartbreak. They scored, as they'd been threatening to do for so long. The first goal we'd conceded all afternoon. Shit. Come on people! Wir müssen ein Tor schießen!
I came on for Shkodran with two minutes left on the clock. We desperately needed a goal. We surged forward. The ball was lashed in. The defence found it hard to deal with. Out of the sky it dropped. I shot. And scored! How the fucking thing went in I don't know. It was an impossible angle, and the ball just looped over the despairing arms of the 'keeper. Still, I'm not complaining! We celebrated as if we'd won the World Cup. Woohoo!
The final whistle went. 1-1. And so to the dreaded penalties to decide who went through. Up stepped Cristoph, Jean Baptiste and Eoin to decide our destiny. Jesus... the tension. We could barely look. Fingers in mouths. I guzzled the rest of the beer. We needn't have worried however. The lads did the business, and we were through to the quarter finals! 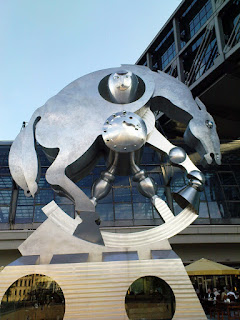 Our next opponents were again a serious outfit, although one would never have guessed it from their name - Flowing Soccers. They flowed their soccer around us and again we found ourselves a goal down with just two minutes left. Frederico abandoned his goal in true Colombian-goalkeeper fashion and ran forward, crossing the ball, but my snap shot was deflected wide. I've never seen a goalkeeper take a corner before but take it Frederico did, and then... Tomas rose like a colossus to head the ball to the back of the net. Woohoo! The dream continued...
Penalties again. Nerves again. Tension. Stress. Strain. After our three penalty takers shot we were still level. They had to go again. Jesus, the tension! Two successful kicks again. Our last kick, however, flew cruelly over the crossbar. That was it. All over. Die Ende. 5-6. But what great heights we reached! Just by fighting like fuck and never letting the heads down.

It was a good day's work. We each got a certificate thanking us for "Ein Zeichen gegen Homophobie". Für Hass und Gewalt gibt's die Rote Karte, it said. Slightly optimistic I'd say. Apparently, the poster boy for the Gaymes is a 21-year-old Turkish Berliner footballer who's been getting mountains of abuse since he appeared on the posters last year. He didn't expect the same poster to be used again this year. "I'm really pissed off," he said unhappily. 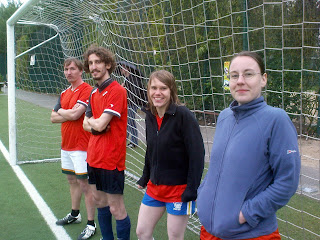 The football itself was a welcome respite from the ongoing political disputes, bitter rows and heated arguments which are threatening to tear Theresas Mütter apart. Jesus, it makes Real Madrid look like a well-run ship! Some people are tired of continuously losing (in the league) and want to change the system to increase our chances of winning. Others feel this compromises the team's ethos of all are welcome irrespective of ability, size, shape, creed, species etc. Others just wanna play football! Time will tell if Saturday was a last hurrah or a sign of greater things to come...
Labels: Berlin Fußball Theresas Mütter