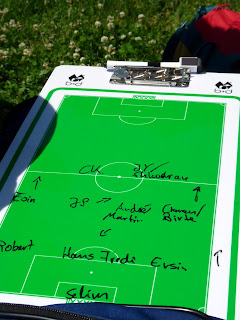 Non-Deutsch speakers may have gathered from the above that we finally won a game in the league. We won! 7-1 with yours truly scoring the all-important second goal. Woohoo!
We had the chance to avenge the heartbreak of three weeks ago when we were cruelly beaten by a last-minute goal. Once again we were pitted against Westberliner SC. Their unjust victory focused our minds as never before. We even had a team plan with our positions marked clearly on a little pitch. I'd never seen such diligent preparation before!
We were focused, we were motivated, we were ready! We got stuck them into right from the whistle. Within a few minutes we got our first reward. Jean Baptiste opened the scoring with typical French flair to put us in the lead. Take that you fuckers! Belief surged through our veins. We can do it!
We had another attack. Ball played forward behind the defence. I bust my guts to get to it before their goalkeeper. 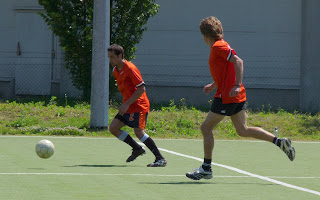 We both got there at the same time and both kicked the ball at the same time. THUMPPP!!! We stopped. The ball inched towards the goal. We looked, spellbound as it crawled towards the line. I mean crawled. I could have gone home, stuck the kettle on, made tea, rang the relations in Ireland, and then come back to see it finally roll over. Not my classiest strike, but what the hell, it went in!
2-0 and just 20 minutes played! JB then scored his second to put us in a commanding position at half time. We remained cautious however. Our heartbreak from before still fresh in the memory. 4-1 up before losing 4-5. We were determined not to let that happen again!

After we scored again at the start of the second half, Skodran winked at me, a great smile on his face. "Noch nicht," I warned him. "Wir müssen aufpassen!"
Sure enough, we then gifted them a goal. A shitty annoying crap goal to give away to bring memories of three weeks previously flooding back. 4-1 again.
We'd learned our lesson however. We wanted revenge! No way could these West Berliners beat us again! Damned Wessies.
Revenge is a dish best served cold someone once said. Not sure if that was a footballer or Al Capone. He might have said it after a match for Mobsters United against the Chicago Police Department. Now that would have been an interesting game. Bound to be followed by a shoot-out. 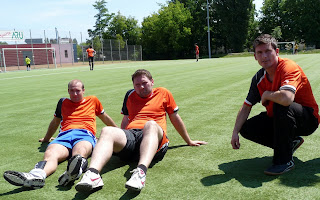 Anyway, we kept cool heads while our opponents lost theirs - throwing themselves to the ground after tackles, screaming pathetically after every half-contact, having fits when the referee's decisions didn't go their way. Jesus, I just wanted to slap them.
Instead we scored more goals. Martin put Germany on the scoreboard, Frederico slammed the ball home for Colombia, and Skodran kept the Kosovan fans happy with his second to cap off a truly international victory for Theresas Mütter!
It was also a victory for the team, with everyone including our two Mädels playing their part. 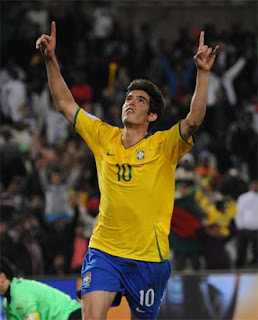 Afterwards, tucking into our Shawarma and Falafel at our celebratory dinner in in Neukölln, I asked my teammates what division we were actually playing in. They were amazed I'd been playing for the team for almost a year and half before wondering what division we were in, but then I found out why nobody had told me before: we were in Division 4B, the last of the last, and up to yesterday we had been bottom of the pile.

The worst team in Berlin? Not anymore! From the bottom, there's only one way to go. Onwards and upwards for Theresas Mütter!