History in the remaking 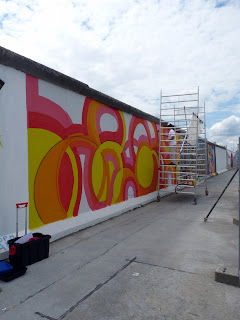 History is being recreated, or should I say repainted, in Berlin this summer as the famous East Side Gallery gets a makeover in time for celebrations of the 20th anniversary of the wall's fall in November.
Not that the Berlin Wall actually fell down - such a thing could never happen in a country which prides itself on its sturdy workmanship - but the crossings between East and West Berlin were declared open on November 9th, 1989, prompting scenes of unbridled jubilation followed by a mass exodus of Trabis and Wartburgs across the border.
Among those celebrating at the time must have been countless graffiti artists, salivating at the thoughts of all that lovely clean smooth concrete just waiting to be painted - a blank canvas for their creations.
Up to that point of course, just the western side of the wall was adorned with graffiti. Nasty East German border guards, death strips, machine-gun fences and fearsome guard dogs among other things had kept would-be-artists well away from the GDR-side of the 140km "anti-fascist protective barrier".
After Günter Schabowski inadvertently brought about its demise by mistakenly declaring the border open, the wall met its undignified end through the actions of eager sledgehammer-swinging locals and countless souvenir-hunting Mauerspechte (wall woodpeckers), but a few sections have survived to this day. 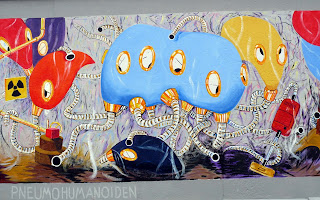 The longest-remaining segment of the wall, a 1.3km stretch at Mühlenstraße, became the famous East Side Gallery when 118 artists from 21 countries brought their visions to life in 1990; their 105 colourful murals helping to convey the feelings of hope and euphoria at the time.
Declaring it a national monument in 1993 did not protect their works of art from almost 20 years of pollution, vandalism, graffiti (how ironic!) or weather however, and in recent years the East Side Gallery became decidedly less impressive than it had been as Berlin was taking its first steps in a brave new world following the wall fall. 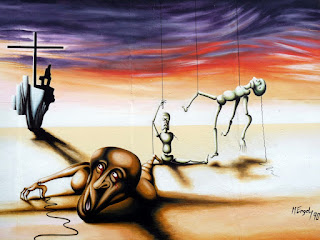 Its shoddy condition became a matter of concern for the powers-that-be, especially with large celebrations pencilled in to celebrate "20 Jahre Mauerfall" later this year, and they decided to take remedial action.
(Cynics would say it's because the monument has become such a tourist magnet, with camera-clutching hordes bringing millions in €uro every year to the German capital. Almost 8 million tourists visited Berlin last year, more than double the city's population.)
After being granted €2.5 million for the restoration project, the authorities began work earlier this year; firstly stripping away the original murals, then reconstructing the cement, and then painting it with a special protective whitewash so the artists could return to recreate their works. They were to receive €3,000 each to redo their magic. 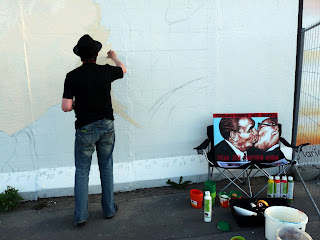 Needless to say, not all the artists were happy. The Russian Dmitri Vrubel was reportedly furious after learning through press reports of the plans. He termed the removal of the famous Bruderkuss mural as "artist abuse" and refused to recreate his image of East German leader Erich Honecker sharing a passionate kiss with his Russian counterpart Leonid Brezhnev.
Yesterday however, Vrubel grudgingly began work to repaint his iconic creation. "I don't like that my work was destroyed," the 48-year-old told reporters. "It's not good and I'm speaking up against it."
He indicated he only changed his mind about repainting the piece after speaking with Iranian artist Kani Alavi, head of the group overseeing the restoration project. Vrubel also admitted he was worried he might not be able to remember exactly what he painted, and that he would not be able to replicate it precisely as it was before. "I don't find it good but okay, I'll do it now," he said with a wry smile before starting work. He'll be at it for the next month at least.
Another unhappy camper is Bodo Sperling who is holding out for more than the €3,000 on offer. He pointed out that the city of Berlin had made "seven figure sums" from merchandising from the East Side Gallery over the years, and he wants €15,000 for recreating his work. Typical Wessie, always looking for more money. He has a few supporters. I guess they must be Wessies too. 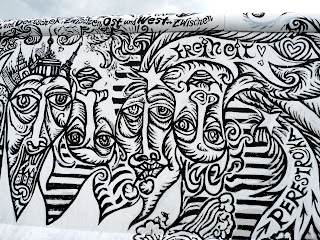 Not all the original artists have been found, with some of the 118 going to the great art gallery in the sky, but 88 are willing to return. Of the ones that didn't die that is. They will replicate their works and restore the others to the best of their ability in time for the grand celebrations on November 9th.
So far, I have to say, the work looks great! I just happened to be passing on my bicycle on my way to an important appointment (I have to at least pretend to be busy), when the furious sound of brush strokes caught my attention. I slowed down enough to see what all the commotion was about, and was soon captivated by what I saw. I must have been there for hours, appointment forgotten as I surveyed the freshly-painted and ongoing murals before me. (I'd been there last year, before the restoration began when it looked crap, and the difference is incredible.) 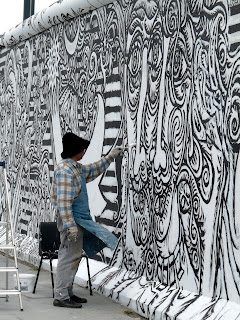 One guy, who was painting with a brush just a little wider than a toothbrush, must have been getting worried as I observed him at work for ages. His work was fantastic though - a huge mural, just black and white featuring interconnected demons, spirits, thoughts, processes, plants with bones etc. Life and death, everything connected, whatever the hell it means, it was great stuff - something I told the artist in German before realising later on he's probably an Auslander like me. He didn't reply in any case, probably afraid I'd stay even longer if he did. 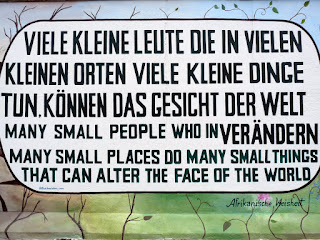