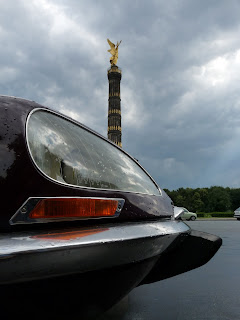 Personal vanity has once again been sacrificed. Today I ordered glasses for the second time. The last time I ordered glasses with the intention of improving my perception of things around me, I left them behind on a bus city tour of Cuidad de México. They were left sitting on the seat beside me, perhaps proving that I didn't really need them to begin with. After all, if I wasn't going wear them on a feckin' sightseeing tour, then when was I going to wear them?
After buying them at considerable expense at a place called Apollo Optik, I thought I'd be able to see things on the moon. An opticians for astronauts (or cosmonauts as probably called here). Arse. I would have been happy just to see an old rocket wreck, or a ruined lunar module, but I could see no such things. I couldn't even find the film studio where Armstrong allegedly planted the flag or started any of the other conspiracy theories. 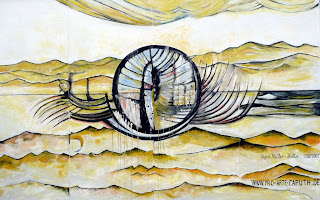 I'd probably only worn the glasses five times altogether, each dealing a further blow to my self-esteem and pride. I felt like one of those poor dogs who have to suffer the ignominy of those conical flea-collars, walking around with heads like satellite dishes while their fellow canines snigger and guffaw, suppressing the howls of laughter for fear of themselves catching the fleas' attention.
But the seed of having perfect eyesight was planted in my head. How great it would be to see things on the moon! I'd tried everything. Even carrots, but I soon found that's another myth. I dunno how many carrots I'd stuck into my eyes to better my night-vision but they seem to have the opposite effect. I might as well have eaten the damn things. 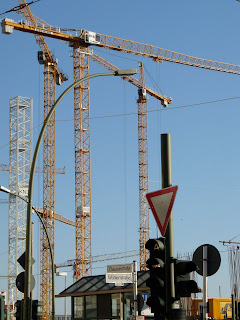 So eventually I decided it was glasses or nothing. I didn't go back to the lying Schweinhunde at Apollo however, instead taking my increasingly-decreased sheckles to the unfortunately-named Fielmann. What a terrible name for an opticians. Why feel when you can see?
Never mind. With the help of a volunteer with perhaps the greatest to lose/gain from my new furniture face features, I finally picked a pair of spectacles today which bring the promise of new discoveries. Sure, I might look like an eejit, but won't it be great to have supersonic eyesight? The air-bubble rising as a fish burps after a good meal; the fear on a fly's face when he sees the spider coming and realises the futility of struggling against the sticky clutches of the web; the spider's look of disappointment when he realises it's just another skinny fruit-fly in his ointment.
I'm not happy about this development, but unseen things remain to be seen. And if I do look like a fool, hopefully I'll look like an intellectual fool.
Labels: Glasses Vanity