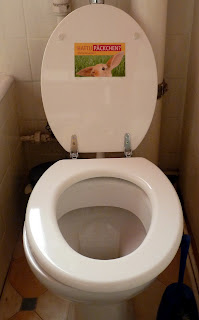 The idea of Germans having no sense of humour is a myth. I find the opposite is true in fact. Sure they may laugh at things no one else would find funny and tell bad jokes which they alone find absolutely hilarious, but I think this only shows they have a very healthy sense of humour indeed. Of course, the locals particularly appreciate the humour generated from others' misfortunes - you'll never hear a good offer of Schadenfreude turned down.
Germans like nothing better than a good laugh, the louder the better, preferably raucous and accompanied by a spate of hearty thigh-slapping. Most of the time, I've no idea at all why they're laughing and can only presume it's because of something extraordinarily witty and perhaps satirical I may inadvertently have said. (It may also be because of my increasingly ridiculous-looking hair. I've decided to get it cut on June 16th, exactly half a year since it was last chopped!)

Toilet humour, as it is sometimes disparagingly referred to by societies to the west which consider themselves more refined, is well appreciated here. I can think of no better example than the following which can be found on a toilet which is close to my heart (and sometimes other parts). 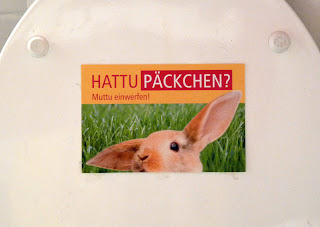 Originally an advert for Deutsche Post's parcel service, it features a surprised-looking rabbit with its ears cocked to the sides in a most seductive manner.
"Hattu Päckchen?" it asks. "Muttu einwerfen!" (Have you a small parcel? You must throw it in!)
I'm sure it's not the use the marketing gurus at Deutsche Post intended for it, nor indeed the rabbit. Apart from the subtle reference to shite, another source of amusement for native speakers is the language used. It's actually bad German, or even babies' German. Maybe both. Bad babies' German. The little cigarette-smoking tattooed feckers.
You'd only find a bad baby saying "Hattu" instead of "Hast Du", or using "Muttu" for "Muß Du".
It may also be, in fact, rabbits' German, which would make sense since a rabbit is featured in the picture. I don't know. I haven't engaged a rabbit in conversation here yet so I've no idea how they handle their grammar. Maybe their Deutsch isn't fleißig yet either.
Either way, the locals take great pleasure (luckily) in hearing their own language butchered by Ausländers like me - perhaps the real reason they find my anecdotes so rip-roaringly hilarious.
Labels: humour Language Schadenfreude toilet humour