Bought a new lock for my bicycle yesterday. €35. Thirty-five euro!!! But one has to be certain in this city of bike thieves but otherwise law-abiding citizens.
Over 23,000 bicycles are reported stolen every year in Berlin, so I wasn't taking any chances when my old lock died. Through some sort of bike-lock karma, it died straight after Jenny bought a new lock for her bicycle. 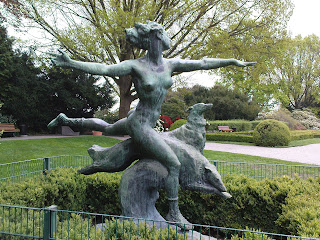 The damned bike is costing me a fortune, what with locks this week, a new back-light the week before, crash damage compensation two weeks before that, and all manner of shit before.
It also has an insatiable appetite for puncture repair kits and new tubes, probably due to Berlin's lax laws regarding drinking in public - broken glass all over the place. Still, in not complaining. If daily punctures are the price for on-street parties and outdoor revelry, then so be it!
Of course, the current bike is the third I bought since moving here. The first was shite, so I had to bring it back. (Never buy a bicycle with square wheels.) The second was stolen less than a week after I paid €400 for it. Locals advised me at the time to buy a crappy old bike for €20 which would attract less attraction and be less prone to glances from envious bike thieves. Did I listen? No. That would admit defeat. I went out and bought exactly the same bike. Another €400. This time however, I made sure to insure it.
I've been disappointed with the thieves' response to be honest. Now I have the same bike almost a year later. The fuckers must know it's insured so they won't steal it. I'd been hoping lately it would be stolen so I could get another bike. One that's bigger, faster, lighter, snazzier - einfach besser. Maybe one that can fly too. I've been cycling like a lunatic lately (38.4km yesterday), so a flying bicycle would actually be quite useful.
So when the old lock died, I was presented with a dilemma - do I actually get a lock or not? Maybe I should simply leave the bike at the mercy of the thieves before claiming the insurance and buying my new super-bike. After all, what's the point of insurance unless one makes use of it?
In the end I bought the lock. It's a damn good one, which means, according to Murphy's Law, my bike should be stolen sooner rather than later. Knowing the way the thieves' minds work however, they'll probably steal the lock (because it's not insured) and leave the bike. Schweinehunde!