Trouble with the law 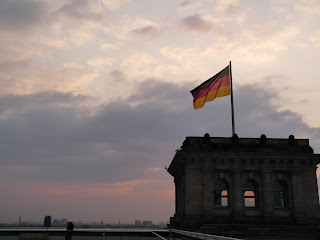 I may have to flee the country. Yes, the Polizei are hot on my heels. One of them was in my room this afternoon, just an hour ago, his giant frame blocking the door as I scrambled furiously to find what he was looking for. Eventually I found it: my passport.
"Humm," he frowned, before trying to pronounce Port Láirge. "Irisch für Waterford," I explained.
"Humm," he repeated, apparently not familiar with Déise hurling exploits.
He took my details and departed, heading back down the stairs with his colleague, a sour-looking cow. She was particularly grumpy and bitchy. Evidently a while since she'd had any Frühlingsgefühling.

They had queried the suspicious absence of my name from the front door. I tried explaining that I keep putting it there but some fuckers keep taking it down again. It must be the English. Who else could it be?
(I notice there are now quite a few visitors to the blog from the UK, presumably all from Scotland or Wales. If not however, the above was meant in jest.) 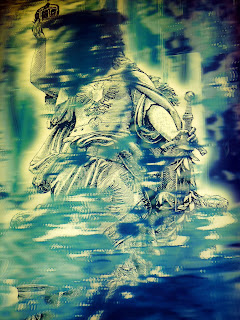 The unfortunate business began on my way home from Volkshochschule via the supermarket. The car in front of me took off at the green light and I went to pull my bike between it and the car behind when the clown in front braked suddenly. Of course I went crashing into the back of him. I had been too busy avoiding the car behind to notice him stopping.
It seems his shiny black Audi is more fragile than my bicycle which inflicted two dents/scratches to its rear.
"Tut mir leid," the driver said as he got out.
"Damn right you fecking eejit. What the hell were you doing?"
He explained a "Madel" on another bike pulled out in front of him and he had to brake. I didn't see any Madel but there you go.

The Polizei were duly called, and they quickly ascertained I wasn't angemeldet (registered) at my address. Apparently you have to register here after you've been in the country seven days.
Seven days! Well, I've kinda been busy the last one year, one month and two weeks, so I hadn't gotten around to it yet. I blame the English again. Now I can expect a €35 fine to arrive by post. I'm not sure if that's for the accident or my lack of Anmeldung.
The Polizei couldn't tell me what will happen regarding your man's car. He seemed to think it was my fault. Of course I've no insurance or anything like that. He estimated the damage at €1,000. Yeah right. I sure as hell won't be paying it.

So I may have to leave. I wouldn't be the first to flee Germany for South America. I wonder if my gal would come with me...
It seems a bit extreme however. Maybe I'll just lay low awhile in Berlin, wait for the Polizei to make the next move before deciding what to do. 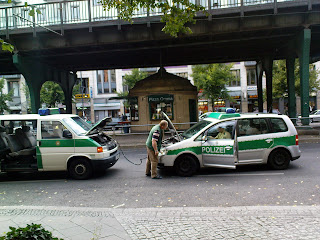 Actually, they may have more on their hands at the moment than they would have imagined. Among those who waited for me to leave before engaging in riots in Berlin last week was an off-duty cop! He was one of 289 people arrested for taking part in the shenanigans which left more than 450 of his colleagues injured. Apparently he is suspected of throwing cobblestones and striking police officers in at least two instances! Like most things in this city, you couldn't make it up.
Good pictures of the action, (unfortunately none of them mine), can be seen here.
Labels: Berlin insurance