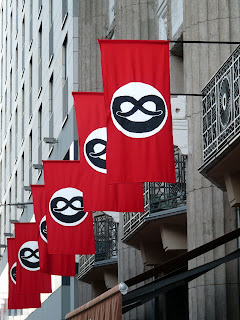 Hitler will soon again be performing in Berlin; a prospect filling locals with unease and trepidation 64 years after World War II.
Germans are bracing themselves to see him in an unfamiliar role however, as the Führer is taking to the stage to sing “Heil Myself”, flanked by tap-dancing Nazis and accompanied by big-busted beauties wearing over-sized pretzels and sausages on their heads.

The Producers: Springtime for Hitler was always going to cause controversy in the Vaterland if and when it ever opened here, but its German premiere on May 15th in the theatre where Adolf had his own private box is, for some, just pushing things too far.

Elderly locals complained straight away about the red Nazi-esque banners adorning the Admiralspalast on Friedrichstraße, bringing police quickly to the scene. There was even a complaint from the German advertising agency despite the use of pretzels in place of the swastika, banned under German law.

Some might say Mel Brooks’ hit Broadway musical is following in the footsteps of Hitler itself, with the award-winning production coming to Berlin complete with Austrian cast from its 10-month stint in Vienna.
Based on his 1968 film of the same name, it first opened in 2001, and its success led to the film being remade in 2005, again under the watchful eye of Brooks. He’s understandably thrilled to see his satire shown in Hitler’s backyard, proclaiming it “a huge triumph for myself”. 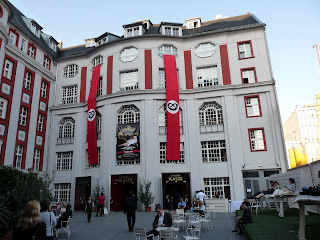 However, newspaper columnists have questioned its morality, asking if it’s too soon to laugh at Hitler and the Nazis, while others feel queasy finding humour in Germany’s dark past.
For Falk Walter, manager of the Admiralspalast, there are no such issues however. “I am convinced once people see The Producers, they will be enthusiastic,” he said, “especially the younger generations, those born during or after the Nazi regime or World War II.”
Mr. Walter believes there has never been a better time to stage The Producers here, and he is hopeful that the nationalism which followed Germany’s successful hosting of the World Cup in 2006 will help people move on from the past. 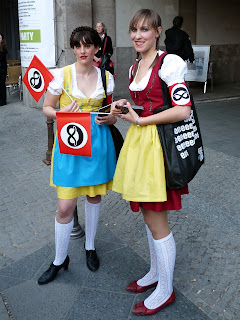 Hitler frowned on the sort of debauchery which went on at Admiralspalast in the 1920s, preferring operettas such as The Merry Widow. The Nazis refurbished the theatre, building the over-sized Führer’s Box which is still there today, albeit scaled down to more modest proportions.
It can be booked for every night of The Producers’ run, except for the opening night, leading to speculation it will be attended by none other than Mel Brooks himself.
“We are hoping he can make it,” Mr. Walter explained. “He has also been invited by the Mayor of Berlin, Klaus Wowereit.”

Brooks cheekily admits commercial reasons have made him a “bigger Jew than I actually am”.
One man sure not to see the funny side of all this would be Adolf himself. Thankfully he’s not in charge anymore.
Labels: Berlin