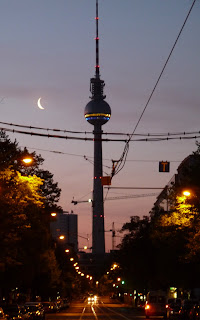 It seems the riots kicked off as soon as I left. I had gone down to Kreuzberg with camera in hand specifically to see if there would be any action. Social obligations meant I couldn't hang around indefinitely on the off chance of carnage, and so I left before the fun began.
The fuckers must have started as soon as I turned my back. I heard on the radio this morning 200 arrests were made and loads of people were injured. A group of 400 masked "militants" began throwing stones and bottles at police shortly after the bands and diversions wound up, sparking hours of running battles which lasted well into the night. The police used pepper spray and tear gas but that didn't stop cars and bins being torched, shops getting smashed up, or any police officer unfortunate enough to be separated from his buddies being attacked and beaten by gangs. Apparently some of the "protesters" threw fireworks and Molotov cocktails at police. They also threw stones and bottles at ambulance crews as they tried tend to the injured. Fucking idiots.

On Thursday night, Walpurgisnacht, we had gone to Mauerpark to party, drink beer and enjoy the festive atmosphere. The park entrances were sealed off and security searched people's bags as they went in. No bottles were allowed in, so beer was poured into plastic glasses. Then the floodlights were turned on, drenching the park with light.
The security arrangements may have been well-meaning, but totally ruined the atmosphere and we didn't hang around. Usually Mauerpark is great, everyone bringing their own bottles of beer, just sitting in the grass, chatting, listening to music or watching a performance, relaxing, enjoying the freedom of living in Berlin.
That freedom was restricted on Walpurgisnacht, and thanks to the idiots last night the police have the perfect excuse for doing so.
Labels: Berlin Mauerpark