Nodding off with Nod 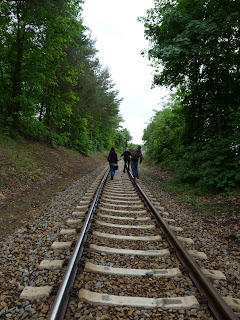 Poor ol' Noddy wasn't a happy camper to be going home. "The thought of having to go back to that country in the morning is making me SICK!!!" he exclaimed over Frühstuck on Sunday. His sudden outburst startled fellow breakfasters and sent birds flying up from the treetops. For a moment it seemed as if life in Berlin just stopped, as if all were considering the meaning of his words.
"That country." He couldn't even bring himself to say its name.
Well, he's back there now, if only for a couple of months which can't go quickly enough for him. Then Australia will have to get used to his sudden outbursts.

We spent an inordinate amount of time asleep on Berlin's public transport over the weekend. Probably just as well; we had to sleep sometime. It was 11 a.m. Saturday when we got home after negotiating our way through Friday night. We left Kaffee Burger to wake up on the tram near Ahrensfelde. The damn thing must have taken us home and then back out to Ahrensfelde, about as far from my house as you can get without hitting Poland.
In Ireland, where they're used to drunken idiots falling asleep on trains and buses, they usually wake you up when you get to the end of the line. Not in Berlin. 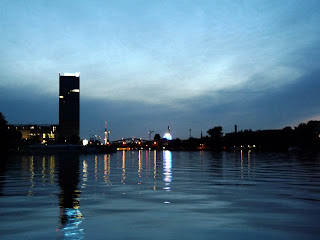 It happened again the next night, when we woke up in Sonnenallee. How that happened I still don't know. It isn't even on the same line as the S-Bahn we had taken. A bottle of tequila and a feed of beer might have had something to do with it. It's not as unhealthy as it sounds; we had orange and cinnamon with it, and there were three of us. We had made our way to Treptower Park where we sat on the banks of the River Spree, legs dangling over a discarded shopping trolley in the water, listening to the ducks, looking across at the bright lights and the Fernsehturm blinking away in the distance. A bat flittered above our heads before dusk made him invisible. The odd S-Bahn would occasionally rumble by on the bridge to our left, but apart from that all we could hear were the ducks, and the odd cries from like-minded souls elsewhere in the park. That for me is Berlin. No knackers. No Polizei or Gardaí. No one hounding you. No stress. 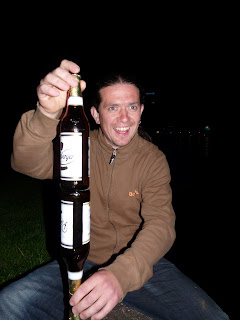 We discussed life. Solved all our troubles. Looked to the future. Pondered the past. Asked questions. Questioned answers. Righted the world's wrongs. That tequila is great stuff!
We differed in opinions. I said I wanted to know everything, everything there is to know, all the knowledge there is.
Others were more practical and selective about what they wanted to know. "I don't want to be bothered with the shite," Jenny informed us. Fair enough.
On second thoughts I don't want to know the shite either. How to get home without waking up in strange S-Bahn stations on the other hand, is most definitely not shite.
Labels: Berlin Fernsehturm humour Life Noddy